Based on Julia Quinn’s best-selling series of novels, BRIDGERTON, is set in the sexy, lavish and competitive world of Regency London high society. From the glittering ballrooms of Mayfair to the aristocratic palaces of Park Lane and beyond, the series unveils a seductive, sumptuous world replete with intricate rules and dramatic power struggles, where no one is truly ever on steady ground. At the heart of the show is the powerful Bridgerton family. Comprised of eight close-knit siblings, this funny, witty, daring and clever group must navigate the upper ten thousand’s marriage mart in search of romance, adventure and love. 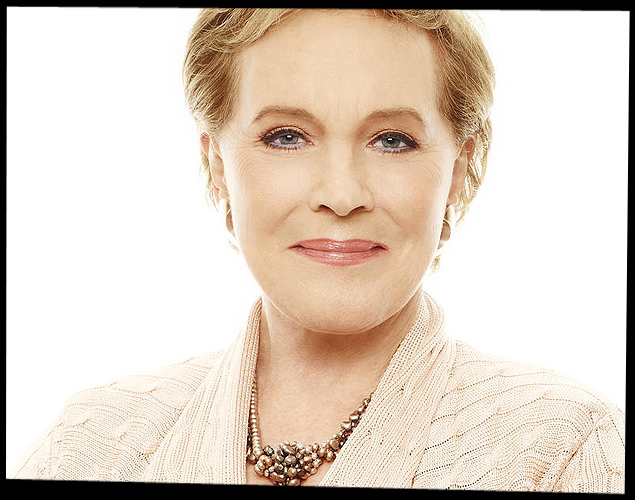 CASTING
JULIE ANDREWS will lend her voice to the character of “LADY WHISTLEDOWN.” Anonymous to readers, this mysterious, sharp-tongued gossip writer uses a curious mix of social commentary and scathing insult to send the season of 1813's ton into an all-out frenzy.

BIO
Julie Andrews has been a beloved and much-honoured star of stage, screen and television for more than half a century. She was already a Broadway legend when she made her feature film debut in 1964’s “Mary Poppins.” Andrews’ iconic performance in the title role of the magical nanny brought her an

Academy Award ® , a Golden Globe and a BAFTA Award. The following year, she earned a second Oscar ® nomination and won another Golden Globe Award for her unforgettable portrayal of Maria Von Trapp in “The Sound of Music.” She received her third Academy Award ® nomination and won another Golden Globe Award for her “dual” role in “Victor/Victoria” in 1982. Today’s young film audiences may be more familiar with Andrews as a queen trying to train her teenaged granddaughter to be a princess in the hit films, “The Princess Diaries,” and its sequel, “The Princess Diaries 2: The Royal Engagement,” as well as Gru’s mother, Marlena, in the hugely successful “Despicable Me” and “Minion” franchises. Andrews also voiced the character of Queen Lillian in the blockbuster hits “Shrek 2,” “Shrek the Third,” and “Shrek Forever After.” More recently, she voiced the narration of the very successful Disney release of “Enchanted.” In 2010, Ms. Andrews added to her multi- generational appeal with the release of “The Tooth Fairy.”

Her earlier motion picture credits also include “The Americanization of Emily,” “Hawaii,” “Thoroughly Modern Millie,” “Star!,” “Darling Lili,” “SOB” and “10,” to name only a few. Julie was born and raised in England, where she first came to fame as a young musical performer on stage and on radio. She was still in her teens when she made her way across the Atlantic and to Broadway, in her 1953 debut in the musical “The Boy Friend.” She went on to create the role of Eliza Doolittle in Lerner and Loewe’s Broadway musical “My Fair Lady,” which became an instant classic and the longest-running musical of its day. Andrews also won a New York Drama Critics Award and garnered a Tony Award nomination for her performance. She received another Tony Award nomination in 1961 when she originated the role of Queen Guinevere in the Lerner and Loewe musical “Camelot.” Thirty-five years later, Ms. Andrews returned to Broadway to star in the 1995 stage adaptation of “Victor/Victoria.” Julie’s career came full circle in 2005 when she directed a revival of “The Boy Friend” which toured throughout North America.

Julie has also been honored for her work on television, beginning in 1957 with her Emmy-nominated performance in the title role of Rodgers and Hammerstein’s musical “Cinderella.” She later won an Emmy Award for her own musical variety series, “The Julie Andrews Hour,” and also earned Emmy nominations for “Julie and Carol at Lincoln Center” (with her “chum” Carol Burnett) as well as her performance in the TV holiday special, “Sounds of Christmas.” Andrews’ more recent television movies includes “One Special Night” with her friend James Garner, “Eloise at the Plaza,” “Eloise at Christmastime” and re-united with Christopher Plummer in the CBS live production of “On Golden Pond.”

Ms. Andrews, already an accomplished best selling author (“Mandy,” [1971], “The Last of The Really Great Whangdoodles,” [1974], has joined talents with her daughter, Emma Walton Hamilton, to pursue the publishing of books committed to stimulating a sense of wonder in children and young readers. The Julie Andrews Collection was launched in October 2003 and has released over 25 books to date, (many of them bestsellers) including the “Little Bo” series, the “Dumpy The Dump Truck” franchise, “The Great American Mousical,” “Thanks to You” and “Simeon’s Gift” (the musical/stage adaptation of which toured parts of the U.S. in 2008, including two performances at the Hollywood Bowl, and in London in 2010) and “The Julie Andrews Collection of Poems, Songs &amp; Lullabies.” “Home – A Memoir of My Early Years,” Ms. Andrews’ autobiography was released in April 2008 to rave reviews and immediately climbed to #1 on the New York Times Bestseller list as well as several other prestigious lists in the U.S. and abroad. Julie and Emma are enjoying great receptivity to their new franchise of books called “The Very Fairy Princess.” The initial release ascended rapidly to #1 after its May 2010 release on the New York Times Bestseller list and enjoyed top 10 status for over 10 weeks. It was followed in May 2011 with “The Very Fairy Princess Takes the Stage” (which reached #1 status as well),and then in April 2012, “The Very Fairy Princess – Here Comes the Flower Girl” (which enjoyed top 10 status for several weeks). In October 2013, “The Very Fairy Princess Sparkles in the Snow” was released and has shown its “sparkle” as a perennial by being re-released in November 2014 for the holiday season. Valentine’s Day 2013 was greeted by “The Very Fairy Princess Follows Her Heart” and the latest picture book was “The Very Fairy Princess Graduation Day” which was released in April 2014. Interwoven in these releases were several activity books and doodle books and “earlier reader” books that have rounded out the franchise. In October 2012, Julie adapted and directed her best-selling children’s book “The Great American Mousical” as a musical for the stage. The project opened at the Norma Terris Theatre at Goodspeed Musicals in Connecticut and received a spectacular reception. Several other projects authored by Ms. Andrews are currently being developed for filmed and TV entertainment.

Although she continues to receive offers for films and TV as an actress, she is Immensely enjoying her work “behind the cameras.” In addition to her stage and screen work, Julie has dedicated her life to her family and to service important causes, including Operation USA, an international relief organization with which Julie has traveled to such places as Vietnam and Cambodia. From 1992 to 2006 she was honored as the Goodwill Ambassador for the United Nations Development Fund for Women (UNIFEM), which provides financial and technical support for low-income women in developing countries. Ms. Andrews received her honours as a Dame of the British Empire by Her Majesty Queen Elizabeth II on New Year’s Eve 1999. She was also a 2001 Kennedy Center Honoree, and, in 2011 was celebrated with the SAG Lifetime Achievement Award. More recently, in 2016 Julie helmed a first class revival of “My Fair Lady” which toured through Australia for 12 months and broke all sales records at The Sydney Opera House. The production was immaculately produced, and replicated the original stage and costume designs of the 1956 debut production in which Julie created the Eliza Doolittle character. Also in 2016, Julie co-created, wrote and executive produced “Julie’s Greenroom,” a children’s television series about the arts, created for Netflix in partnership with the Jim Henson Company. The series earned three Emmy nominations, including Outstanding Preschool Children’s Series and Outstanding Writing in a Children’s, Pre-School Children’s or Family Viewing Program.

For more about Ms. Andrews and her activities and book collection, please go to her website.