NETFLIX WRAPPED: ORANGE IS THE NEW BLACK, CHILLING ADVENTURES OF SABRINA – How Long It Takes to Watch the Most-Binged TV Series! | The Fan Carpet

NETFLIX WRAPPED: ORANGE IS THE NEW BLACK, CHILLING ADVENTURES OF SABRINA – How Long It Takes to Watch the Most-Binged TV Series!

It takes five days on average to binge watch a series on Netflix. However, stats show that 8.4million current users try to finish a series within the first 24 hours*. It’s safe to say binge watching has become a hobby and a skill.

So, in a bid to unravel just how obsessed we are with binge watching, OnBuy.com used the 20 most-binged TV shows on Netflix* to create your ‘Netflix Wrapped’, highlighting just how long it would take to watch every episode, and comparing the things you could have been doing instead*!

'Orange Is the New Black' takes 3 days, 18 hours and 21 minutes to finish all 91 episodes
Instead of watching Orange is The New Black, you could have completed two weeks of basic training to become part of the Operational Support staff in HMPPS, carrying out security searches, reporting contraband items and checking CCTV.

Trending TV show 'You' would take up 15 hours and 29 minutes of your life
Alternatively, you could have learnt ethical hacking from scratch, gaining similar skills as Joe, such as bypassing login forums.

Sitcom 'The Ranch' takes 1 day, 11 hours and 54 minutes to get through all 70 episodes
Within this time, you could have learnt how to make 18 classic cocktails on a course and become a qualified bartender.

Series one and two of 'Chilling Adventures of Sabrina' would take 19 hours and 9 minutes of watching time
Within this time, you could have learnt the ins and outs of crystal healing, gained a level three qualification and applied for jobs in the sector.

'Stranger Things' was the most-binged Netflix Show, it takes 21 hours and 49 minutes to watch all three seasons!
However, instead you could have gone on a dungeon crawl, and completed seven rounds of three-hour Dungeons & Dragons games.

Watching all 3 seasons of 'Marvel’s Jessica Jones' would take 1 day, 9 hours and 7 minutes
Instead of watching it on your sofa, you could fly to Las Vegas, visit the Marvel Avengers interactive exhibition, go for dinner and bowling at a cosplay themed bar and flown home with time to spare.

'13 Reasons Why' takes 1 day 12 hours and 51 minutes to watch all three seasons
In the time it would have taken to watch every episode you could have trained to become a peer mentor for young people and achieved a qualification.

'Lucifer' takes the second longest to watch on the list, with all 67 episodes taking you 2 days, 1 hours and 57 minutes in total!
Instead of watching Lucifer you could have applied for a volunteer Met police internship and been working with them for five months. 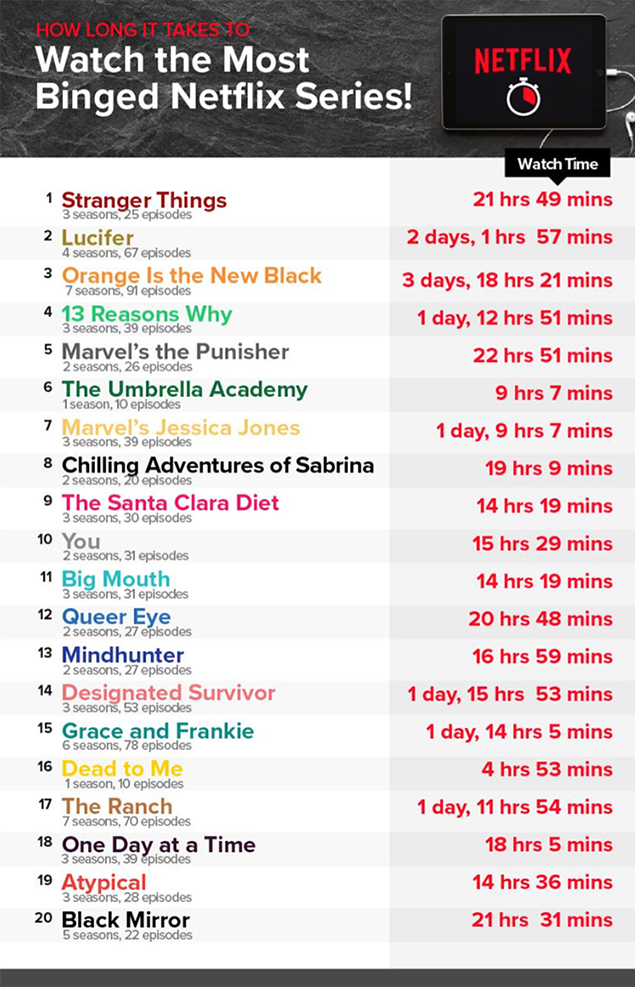 Notes to editors
*All figures cited from techjury.
*OnBuy used Insiders ’20 most-binged TV shows on Netflix
*OnBuy has compared what you could have been doing based on what each series was about