Quite simply a ‘doozy’ of a film experience… With his flamboyant persona and acerbic delivery, in-the-closet comedian and actor Paul Lynde became one of America’s best-known television personalities in the 60s and 70s. Along with recurring roles in the likes of Bewitched and his coveted position in the ‘centre square’ on glitzy gameshow Hollywood Squares, Lynde would also lend his distinctive voice to a series of villainous characters in animation studio Hanna-Barbera’s productions. 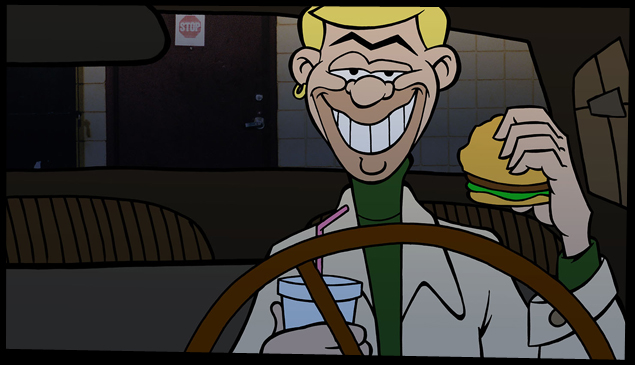 In Doozy, artist-filmmaker Richard Squires creates animated antihero 'Clovis' (voiced by Kids in the Hall comedian Mark McKinney) to look through the lens of one of Hollywood’s hidden queer histories by re-enacting some of the wilder episodes from Lynde’s colourful life. The film uses Clovis to contemplate the uncomfortable parallel between cartoon villainy and hysterical masculinity; the use of voice to signify ‘otherness’ and the frequently uneasy relationship between character and actor. Creative documentary Doozy mixes original animation, re-enactment, archive and expert testimony into a unique new work.

Doozy received its world premiere at the BFI London Film Festival in 2018 and has since screened at the Rotterdam International Film Festival 2019. Funded by Wellcome, Arts Council England and Kingston University.

Get Tickets NOW from LMFYFF Productions.