YOUNG. WILD: New Poster And Trailer Released For WOOLF WOMEN – DOWNHILL SKATERS Ahead Of Its Release In Spring 2021 | The Fan Carpet

YOUNG. WILD: New Poster And Trailer Released For WOOLF WOMEN – DOWNHILL SKATERS Ahead Of Its Release In Spring 2021

Due for release Spring 2021

Woolf Women is a true account of Jenny and her 4 friends who accept a challenge to go to Sumela – an ancient monastery built in AD386. It clings precariously to a vertical rock face with a terrifying sheer drop of 1,280 metres and is located deep in the Pontic mountains of Turkey.

Jenny has been struggling to get over the unexpected and sudden loss of her father. Her friends are worried about her welfare and state of mind. Her depression has already led to her losing her job and as a result she gives up her home to go live in her van and skate professionally full-time. In order to seek solace and distraction, she plans and dreams of an adventurous skateboard expedition with her friends. 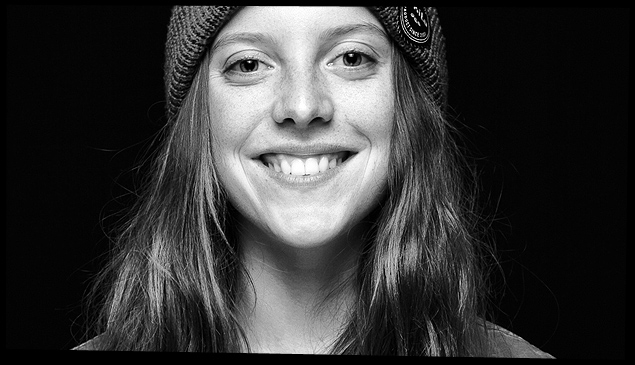 Upon meeting Marchella, the expedition becomes a reality and the girls make it their mission to go to Sumela, with the hope that Jenny finds closure and they can become the first ever Downhill Skateboarders to skate from Sumela. However, shortly before their departure, Jenny meets with another major unexpected calamity.

Woolf Women is a film about personal courage, friendship, adventure and duct tape. It is a testimony to the words – belief and determination. Young, free spirited and athletic - the girls cruise by road for over 5,500 kms each way into uncharted waters to reach Sumela. 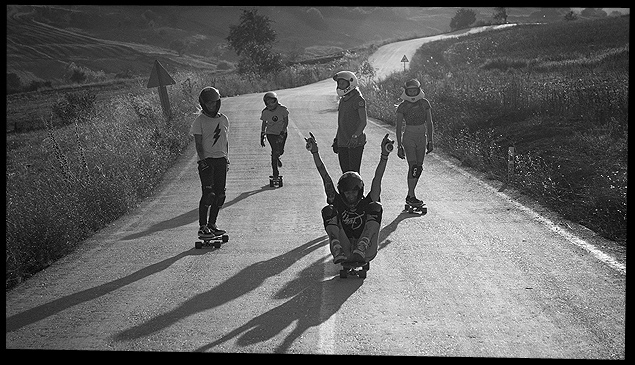 Featuring exciting skate scenes, interesting conversation and stunning scenery, Woolf Women is a modern-day Odyssey like no other.

Jenny ‘Jungle’ Schauerte
International Downhill Federation racer Jenny was born in Boston, USA but grew up in the mountains of Bavaria. Jenny is a downhill skater, artist, designer and adventurer. She travels a lot, absorbs her environment and uses the world as her creative outlet. She recently left London because it got too flat and instead lives in her van, chasing the sun and the mountains. Aside from the obvious thrill and adrenaline, she feels lucky to be part of the skateboarding community - seeing people at events and absorbing the crazy atmosphere and the feeling of "no limits".

In her Masters project at Central St. Martins, adrenaline was featured. Through experimentation, interviews, mixed media, a 9 mins short film, 2 magazines, her dissertation showed undeniably that adrenaline can relieve mental and physical issues including depression and anxiety.

Alejandra ‘Salamandra’ Gutierrez
Salamandra was born in Colombia and qualified in university as a mechanical engineer. Learning to skate at 22 years old, she forms part of a nomadic tribe of millennials that prefer to always be on the move. Albeit Salamandra has suffered multiple injuries during her travels, the freedom to skate and the rush of adrenaline has helped her find focus and peace from troubled times. She always takes good care of her fellow skate women and would bind everyone’s wounds up and put a smile on all faces.
Jasmin ‘SpaceyBee’ Hangraef
SpaceyBee moved from the rather flat Belgium to Austria to feed her passion for Downhill Skateboarding. Light and breezy, Bee is the acrobatic member of the Woolf Women crew and will most likely be the risk taker that the girls will have to watch over. She is a player and will whip out her slackfline or find a funny game to play at any boring moments. Her love for skateboarding has led her to promote the sport through sponsorship programmes and advertising. 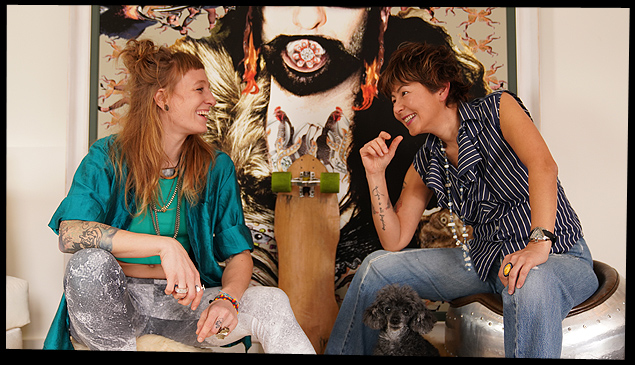 Lisa ‘QueenApex’ Peters
QueenApex is a sports teacher from the Netherlands and is known as the girl with a cute accent. Full of energy and a desire to conquer the world, Queen Apex spends most of her time travelling the world and competing as a pro skateboarder. Apex is looking forward to the Woolf Women expedition and due to her experience will play a crucial part in testing out the risk and safety hazards during the expedition. She is always smiling and manages to cheer up Jenny and the gang when there are edgy moments. She knows how to play safe and still be wild and free.

Anna ‘PixieCharms’ Pixner
Pixie is an Austrian travelling the world. Being an ardent Buddhist, Anna is a believer of fate and destiny, having had a near fatal accident which included puncturing her lungs. She finds peace and healing in the nature and would climb a mountain like a jumping mountain goat. She is also a highly skilled street skater and said to be one of the best at toe sliding. Anna hears the calling of wolves and believes that Woolf Women will help other women embrace the sport without fear.

The Producer
Marchella De Angelis, previously known for her quirky and artistic initiatives spanning art, property and hospitality, has recently turned her attention to producing film.

Marchella before film:
2001 - Marchella jointly launches the iconic club - Lover Lounge Shoreditch
2006 - She designed, rebranded and opened Cotswolds88hotel, which was listed in Conde Nast Traveller’s – Top 65 Hot Hotels of the World 2008, as well as being on the cover page for Black Amex and other prestigious publications.

2009 - She collaborated with pop art impresario Kate Garner to design a unique collection of wallpapers called ‘The Hedonist Collection’, introduced under the banner of De Angelis & Garner. They are now permanently archived in the Victoria & Albert Museum.

2014 - She launched AngeNoir, a luscious party venue in Cheltenham and in 2015 exported the experience to St Tropez as a Pop-Up experience at Hotel Sezz, where she played host and DJ for a summer stint.

2017 - Victory8events was initiated as a side-line vehicle to host charity events whilst celebrating equality for women. From Art to cars, the events encompassed some of her passions, as well as a personal desire to work with charities.

2019 - Marchella decided it was time to develop her career in film.