A new play by Danny Robins

LILY ALLEN, JULIA CHAN, HADLEY FRASER AND JAKE WOOD TO STAR IN THE WORLD PREMIERE OF A NEW PLAY BY DANNY ROBINS (THE BATTERSEA POLTERGEIST)

TICKETS ARE ON SALE NOW 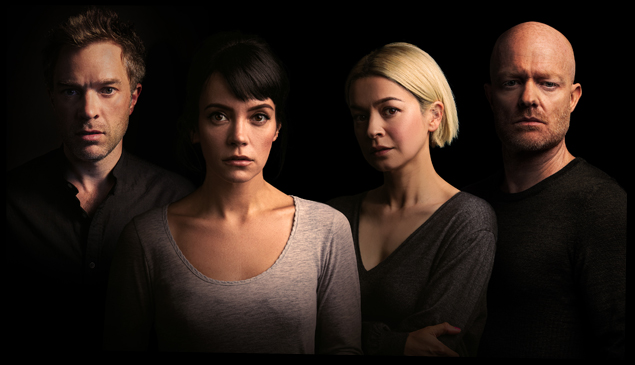 The World Premiere of Danny Robins’ new play 2:22 - A Ghost Story will take place at the Noël Coward Theatre on 3 August. The production will feature Lily Allen, Julia Chan, Hadley Fraser, and Jake Wood and will be directed by Matthew Dunster. The press night will be on 11 August and tickets are on sale from 9am on 10 June. A new selection of rehearsal images has been released today.

Lily Allen makes her West End debut playing Jenny alongside Hadley Fraser (City of Angels) as Sam, Julia Chan (Silent House and Katy Keene) who will play Lauren and Jake Wood (EastEnders) playing Ben. Danny Robins is best known for his hugely successful podcast The Battersea Poltergeist which is being made into a TV series. 2:22 - A Ghost Story is his debut play in the West End. Olivier Award-nominated director Matthew Dunster received universal acclaim for his productions of Martin McDonagh’s A Very Very Very Dark Matter and Hangmen and Sam Shepard’s True West.

“There’s something in our house. I hear it every night, at the same time."

Jenny (Lily Allen) believes her new home is haunted, but her husband Sam (Hadley Fraser) isn’t having any of it. They argue with their first dinner guests, old friend Lauren (Julia Chan) and new partner Ben (Jake Wood). Can the dead really walk again? Belief and scepticism clash, but something feels strange and frightening, and that something is getting closer, so they’re going to stay up… until 2:22… and then they’ll know.

This edge-of-your-seat, supernatural thriller takes you into one adrenaline-filled night where secrets will emerge and ghosts may appear… What do you believe? And do you dare discover the truth?

2:22 - A Ghost Story is produced by Tristan Baker and Charlie Parsons for Runaway Entertainment, Isobel David and Kater Gordon.

2:22 - A Ghost Story
By Danny Robins
Directed by Matthew Dunster

There will be an additional performance on Friday 15 October at 2.30pm