A recent survey of 2040 people conducted by MyFilmClub app (available for free on Google Play and iTunes) on cinema going and loneliness in Britain has found that over 13% of society always feel isolated in their day to day life, with a further 59% saying they often do.

Results generated by Censuswide, on behalf of MyFilmClub, state that 16-24 year olds contributed the most (22%) to this 13% of the British population who always feel isolated on a daily basis. The 25-34 year olds made up the second highest proportion, contributing towards 18% of the overall isolation statistic. Interestingly, only 5% of the over 55s did.

Britain’s loneliness epidemic, which until now is primarily seen as an issue for the older generation, is also highlighted in the result that 40% of 16-24 year olds admit to finding that they struggle to find methods of socialising that appeal to them compared top 13% of those aged 55+.

Other interesting findings show almost a quarter of, 23% of respondents, felt that there wasn’t enough being done to create environments to cater for the needs of the more introverted members of society.

More than a third of Brits, 36%, said they would actively seek out a community group who have similar interests in order to form new friendship groups, with 50% of the 35-44 age group saying they would do so (compared to just 24% of the over 55s).

The 16-24 age group were proven to be more confident to chat about their own experiences of loneliness and anxiety with people who have suffered similar problems (68%), compared to only 44% of over 55s.

3 in 5 Brits say they are more likely to attend the cinema if they were with friends/a group than if they were alone, with a gender split of women 65% to 54% men.

It is worth noting that although the average cost of a cinema price has gone down from £7.49 (2017) to £7.22 in 2018 (Statista), people are still finding that high prices are determining their choice to stay at home, with 68% choosing instead to watch films at via VOD/subscription platforms from the comfort of their living rooms. A quarter (25%) of respondents say they feel lazier than before, with a further 23% not liking the stress of being around people in a confined environment. To draw people back, off peak pricing and regular discounting tops the list of encouragement (46%) and well as cheaper concessions (36%) and a wider variety of films (26%). 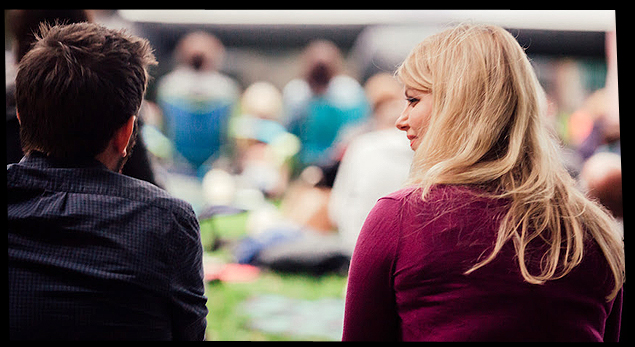 Wez Merchant, creator of MyFilmClub says of the results “Hopefully these results can provide further evidence of the urgent need to generate more community within our society, targeting not just the older generation but the young too. It is great to see they are more aware of themselves however, the stigma of talking issues through is not such a scary prospect to them.”

The creators of MyFilmClub app are on a mission to provide a platform that encourages face to face interactions by generating readymade communities of film lovers. The app provides a platform for local people to connect in chat rooms that they have either joined or created, called 'clubs'. Once you have chosen the film you wish to see, geotags pool the nearest cinemas that the film is showing in. Cinema options, film information and ticket purchasing links can be shared with other club members on your group chat. MyFilmClub can even help out the most forgetful among us by sending push notifications to smartphone calendars, making sure users don't miss the titles they are looking forward to seeing.

Within MyFilmClub, cinemas can also create their own clubs, providing customers with news of special screenings as part of their own network of communications. As well as hosting competitions, film reviews and news items, the app is also a purchasing platform for home entertainment releases.

The invaluable benefits of community and belonging to mental health have been proven in a recent survey conducted by The British Journal of Psychiatry. Results state that we are 48% less likely to develop depression if engaged in community activities once a month or more. The NHS is placing similar emphasis on face to face interaction with Social Prescribing, but this initiative is borne predominantly from worry about loneliness in the elderly. Results of this survey beg the question; what are we doing for those who are less likely to visit their GP and shelter themselves behind smartphone screens?

Grainne Peat, Managing Director of the Event Cinema Association (ECA) says "The power that cinema has to provide escapism is a mantra I have always championed. Cinemas continue to adapt their offerings to be as inclusive as possible, so that more individuals can collectively enjoy the magic of the big screen. The survey conducted by MyFilmClub clearly demonstrates the need for communities to proactively reach out to vulnerable and isolated Individuals, encouraging them to engage in local activities, including going to the cinema. The MyFilmClub app provides a great mechanism to connect people and encourage them to go to their local cinema, whether It be on their own (something I often do!) or with others."

Patrick von Sychowski, Editor of cinema industry resource Celluloid Junkie says, "Cinemas play an increasingly important role in catering to marginalised and isolated communities, whether special screenings for mothers with babies, films subtitled in immigrants' native languages, subtitled film for hearing impaired, or autism and dementia friendly screenings." He continues, "isolation remains a social stigma, but cinemas can go a long way to help, with statistics in the UK showing growing numbers of people coming to the big screen solo. Any help with this, such as the MyFilmClub app, that can encourage them to do so more often and even connect with others is a win-win-win for individuals, cinemas and society."

Jon Salmon, Mental Health Campaigner and founder co-founder of Byte Entertainment said "Prescribing tablets doesn't always fix the problem. Apps like MyFilmClub allow anyone who is suffering from anxiety or depression to build up the confidence to get out and enjoy a film with others. These statistics demonstrate the overwhelming need for fun social apps that act as springboards out of loneliness.”

Get the MyFilmClub App on Google Play and iTunes.

How MyFilmClub Came to Be
Founder Wez Merchant created MyFilmClub app from a place of understanding, after suffering from a debilitating condition called migraine variant balance disorder. Before his diagnosis he struggled with feelings of depression anxiety, and isolation (and balance issues) but found joining a local running club, a choir and having counselling made the despair recede. He says "I felt like it was the end but I came back thanks to where it led me, the outreach I sought, and now I am in a better place than before it began. The app came about because I wanted to give people an opportunity to connect through an industry I love and not have to hit their house deposit savings like I did". Merchant created what he believed would help others in a similar situation; an app that was social in the traditional sense of the word and didn't just propose the idea of internet friends.

Film Sharing in Clubs
Users can now share information on film pages to clubs that they are members of. They can simply click the film reel icon on their club chat, search the film and click share for all of their fellow club members to see. Essentially, members of clubs can now show each other details of films that interest them and share direct links to where others can book tickets to the same local showings.

The above video demonstrates how you can easily create clubs and add people.

Calendar Function
Users can opt to receive push notifications to their handset calendars on the day of theatrical/home ent releases. These notifications will pop up on the user’s home screen in the morning, and direct them to their calendar, where the release will be set as an all day calendar event. Depending on their settings within the app, the user can also be sent a link to the film’s page on My Film Club along with this calendar notification. Following the link to their desired film page on the app, users are able to see the five closest cinemas to them that are showing the film, purchase cinema tickets, digital download titles and pre order films.