Terry Moore Stars as a Centenarian with an Unlikely Friend, a 15-year-old Neighbor played by Isabella Blake-Thomas.

Isabella Blake-Thomas not only acts in the film, but also wrote the script for Evie Rose. Grappling through the most painful part of life, Evie Rose showcases not only the unique challenges that generational gaps can bring, but the rare, authentic joy as well. 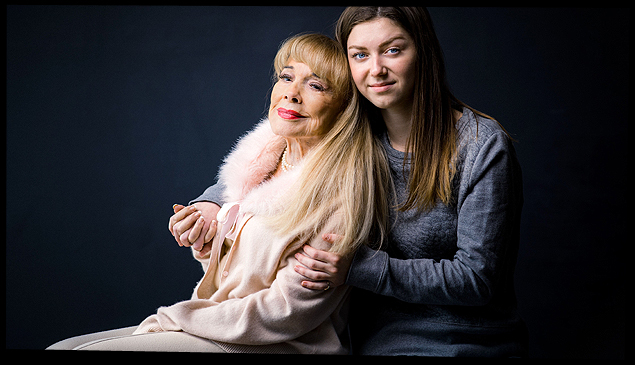 “I read the script and knew I just had to play Evie Rose. She is a once-in-a-lifetime character, and to have this opportunity now is an unexpected surprise! Plus, I get to play older than my actual age, which is a nice change for once,” said Terry Moore. “I saw Elizabeth and Isabella’s short film UNSEEN, and was moved by their storytelling and talent, and I love that they are a mother and daughter team making movies.”

“We are honoured and thrilled to have Terry Moore as Evie Rose. Her passion for this multi-generational project about female friendship, and her dedication to bringing Evie’s story to life, is breathtaking,” said Elizabeth Blake-Thomas, director. “I knew that Terry had announced her retirement after her film Silent Life, but I convinced her she had to help me bring Evie Rose to the world and tell this story.”

Evie Rose dives into the triumphs and hardships of the unique friendship between 100-year-old Evie Rose and 15-year-old Charlotte. Told in real time, the last hour-and-a-half of Evie’s life is played out on screen with such intimacy and endearment. A magical Christmas story of love and friendship, Evie Rose sheds light on the true joys of life and how powerful a bond can be, regardless of age.

Evie Rose was filmed in Santa Monica and around Los Angeles in December of 2019.

Elizabeth said “Working with a Hollywood icon that was Oscar Nominated in 1952 Terry Moore has been a life changing experience. Not only was she an exceptional actress but also a kind and honest person. We shot this feature in just four days. We also shot it in Terrys home because she had actually broken two ribs and if we didn’t move the film to her, it wasn’t going to happen. She was so thrilled to be in a film that her character was the title, I couldn’t not let this happen. My team halved and we made it work. It’s even better than I could have ever imagined. A true story inspired what is now a new friendship.”

Isabella added “This story is based on my best friend who died just over a year ago. She was a 100 years old. I couldn’t have imagined anyone better than Terry playing this role. There were quite a few moments that I felt genuine sadness on set and Terry helped me through it. I don’t think there is a better friendship than with someone much older. They know so much more and have such great stories to share. Terry and I are now best friends. I love her very much. She made his whole experience amazing!”

About Terry Moore
Born Helen Luella Koford on January 7, 1929, the Los Angeles, California, native worked as a model before she made her film debut at age 11 (1940). Throughout the 1940s she worked under a variety of names (her own, Judy Ford and January Ford) before settling on Terry Moore in 1948. Placed under contract by Columbia Pictures, Moore was loaned out to RKO for one of her most famous films, Mighty Joe Young (1949). In 1953 she received an Academy Award nomination for her performance in Paramount's Come Back, Little Sheba (1952). In the 1970s she was in the news more than she was in films, asserting that she was the secret wife of the late billionaire Howard Hughes. She has starred in 77 feature films and listed among her leading men are such Hollywood legends including Burt Lancaster, John Wayne, Cary Grant, Tyrone Power, Glenn Ford, Mickey Rooney and Robert Wagner. Since she was a pilot herself, Terry played a major role in preparing Leonardo DiCaprio for his portrayal of Howard Hughes in The Aviator (2004). She is a skilled pilot and was the third woman in the world to check out in a jet. Moore stars as the mysterious “Lady in Black” in the recent Rudolph Valentino biopic Silent Life. Due to her amazing career in Hollywood, Terry Moore was also honored with a star on the Hollywood Walk of Fame.

About Isabella Blake-Thomas
ISABELLA BLAKE-THOMAS is an accomplished Actress, Singer, Writer, Producer and Advocate. Isabella began her career as the lead in a children’s TV series in the UK and went on to appear in multiple other shows and films before landing the fan-favorite role of Young Zelena in ABC’s Once Upon A Time. Her most recent role is Princess January in Disney+ Secret Society of Second Born Royals, which is set to release in 2020. Isabella is also known for her love of music, with her debut single released in 2018, her debut EP released in early 2019 and her second EP was just released this past September.  Isabella’s work as both a singer/songwriter and actress are equally on display in her latest child trafficking awareness short film, UNSEEN, where she stars alongside Rhyon Brown and Yolanda Wood, accompanied by a soundtrack of Isabella’s original songs.  The Official Ambassador of Suicide Awareness with Awareness Ties, Isabella hopes to shed more light on the prevalent issue of suicide and help put a stop to it. Along with her mother Elizabeth, Isabella is a founding member of their production company Mother & Daughter Entertainment, where together they focus on “Making Content That Matters”, creating projects that start a conversation and spark change.

About Elizabeth Blake-Thomas
Director ELIZABETH BLAKE-THOMAS is a British award-winning filmmaker and philanthropist based in Los Angeles, having recently completed her 7th feature film. Her latest feature Evie Rose, starring Oscar-nominated actress Terry Moore and told in real time, follows the heartwarming story of an unusual friendship during the last hour and half of a 100-year-old woman’s life. Elizabeth is the founder and resident director of entertainment company Mother & Daughter Entertainment, whose motto is “Making Content That Matters”, putting focus on each project starting a conversation amongst viewers. An Official Ambassador of Awareness Ties for Human Trafficking, Elizabeth hopes to raise more awareness to the horrific nature of human trafficking and help put a stop to it. Her award-winning short film UNSEEN, which addresses the role technology plays in the facilitation of child trafficking, is currently available on all platforms. Being a female director, Elizabeth strives to make projects with at least a 50/50 female cast and crew. A regular on panels at Sundance, Cannes and Toronto International Film Festival, Elizabeth mentors wherever possible, ensuring she sends the elevator back down to all other female directors and filmmakers.

About Mother And Daughter Entertainment
Production company MOTHER & DAUGHTER ENTERTAINMENT is spearheaded by two real life mother-daughter duos with the primary focus on "making content that matters". From film to music to publishing, the team at Mother & Daughter Entertainment covers multiple aspects of entertainment from start to finish, resonating with viewers regardless of genre, scale or platform. www.motheranddaughterent.com