Whether it first charmed your ears in a cinema watching the opening moments of Mamoru Hosoda’s BELLE, when the titular diva bursts onto the scene of a bustling virtual world singing atop a whale, or while scrolling through the seemingly endless cover versions and cosplay videos on TikTok, it can be hard to deny that reality has imitated fiction: Belle is a star that came out of nowhere, but you just can’t get out of your head! However, BELLE isn’t a vehicle to launch a virtual singer: it’s the personal coming-of-age story of Suzu Naito, a timid and freckled high school girl who, after withdrawing herself following her mother’s death, finds her voice through song.

The film was a hit both before and on release. At last year’s Cannes Film Festival, its world premiere earned a 14-minute standing ovation - widely reported as the seventh-longest ever, and unprecedented for an animated film. Suzu’s songs continued to reach audiences when the film finally reached cinemas earlier this year, and now, her voice can resonate even further from home with BELLE now available on digital, and coming to Blu-ray and DVD from 27th June. So, we’re looking back at the best musical moments of BELLE - where through dazzling spectacle or intimate reflection, song and story combined to create an unforgettable experience.

We briefly mentioned it earlier, so we might as well start by addressing the elephant in the room - or rather, the whale. From the very second the film begins, hushed whispers and the tantalising rhythm of snare drums build our anticipation as the camera descends on the virtual world of “U”, and indistinguishable black-and-white shapes transform into a vibrant digital metropolis. As we twist and turn around U, we join the digital avatars in searching for the source of the vocals… until the chorus kicks in.

A whale covered in speakers turns around the corner, and on top of it, Belle is in her element as she confidently sings an energetic pop song to enamoured crowds around her. The movie’s opening scene is a visual and musical spectacle unlike anything seen in anime before - and one that will showcase the oomph of your home cinema system. This opening scene is more than an incredible experience, however. It’s our introduction to the film’s heroine, and the film sends a message by having us meet Suzu when she’s at her peak and most ideal: this is who she can be. With the end of the song comes a transition: to Suzu in the real world as she is now: a mousy girl singing hidden under the covers. In just one song, we’ve seen who Suzu is, and who she can be.

Lend Me Your Voice (draft)

The secret to a great song isn’t always in having the excitement and energy of the millennium parade, but also in giving characters a voice to say what they really want to - even if sometimes, the delivery is as fragile as their feelings. Allegedly, Mamoru Hosoda initially envisioned BELLE as a musical, until he realised that the genre didn’t have a big cultural footprint in his native Japan. However, some of the genre’s DNA can still be found in the film.

It isn’t uncommon for anime films to be dubbed into English when released outside Japan, but that treatment is usually only reserved for the film’s dialogue. There are rare exceptions like Your Name that featured an optional English version of RADWIMPS’ non-diegetic pop-punk score, but in BELLE, songs are how Suzu finds and expresses her voice - so it’s all the more important that she is heard and understood. That’s where the incredible talent of her English-language voice actor Kylie McNeil shines, who in their feature film debut, both speaks and sings as Suzu/Belle.

In one of the film’s quieter, more reflective moments, Suzu walks by a riverside, deep in thought about how to get closer to and connect with “The Dragon” - an intimidating but lonely figure supposedly plaguing U. Inspired by an older choir member recalling how they once wrote a love song for someone, Suzu tries the same. The words come to her mind quickly, but they come out hushed, and with a nervous quiver.

The nervousness in Suzu’s song is amplified by the scene’s visuals, with her eyes darting all over the place - the girl used to all eyes being on her in U can’t bear the thought of being seen at her most vulnerable: as Suzu. Later on, she sings the song more confidently as Belle in a scene that is equally as worthy of an inclusion on this list, but this more rough-around-the-edges rehearsal has a certain charm and emotional touch that really sets it apart. It’s a small moment, but an important one. 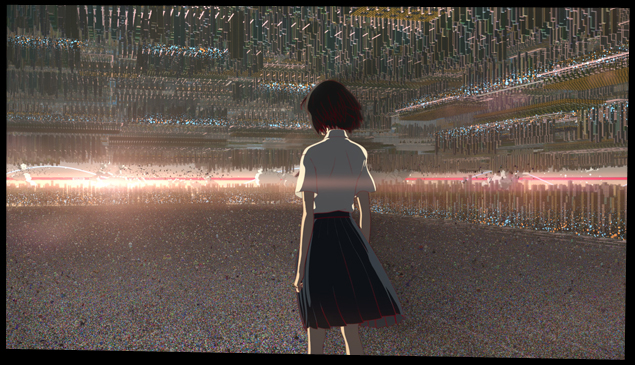 A Million Miles Away

With our first example being a larger-than-life spectacle and our second being a more intimate character moment, it’s only fitting that our favourite musical moment in BELLE is one that’s the best of both - and truly encapsulates the film’s theme of expression through song.

In case you haven’t already seen BELLE, we won’t spoil the events leading up to Suzu’s big moment - where she has to push through all of her insecurities and sing her heart out, but it’s without a doubt director Mamoru Hosoda’s both breathtaking climax yet. The film’s vast long shots that once pleasingly made the virtual world of U feel buzzing with life now bring a crushing, isolating weight down on Suzu’s shoulders. However, despite the nerve-wracking scale of the visual spectacle, the song is a deeply personal one meant only for one set of ears.

For the most part, A Million Miles Away doesn’t have the energy of U that Belle embodies, but it captivates us with the heart of Suzu. The song is more than just a simple love song, it’s a plea: Suzu baring her soul in the hopes of connecting with someone. The result? A truly mesmerising cinematic experience that connects with all of us… and might have left a few tears!

Of course, it is fair to say that music is both subjective, and hard to truly describe in words. Do you have a favourite musical moment from BELLE? If you’ve yet to experience it for yourself, then you can either listen to the soundtrack on all good music streaming services, or you can watch their performances play out in the film, with BELLE available now on digital, as well as Blu-ray and DVD from 27th June.

BELLE IS OUT ON DVD AND BLU-RAY ON JUNE 27