After a rapturous reception earlier this year at the 2019 Sundance Film Festival, PICTUREHOUSE ENTERTAINMENT are delighted to announce the UK release of JUDY & PUNCH, in cinemas nationwide 22 November 2019 following its European Premiere as the BFI London Film Festival’s Dare Gala on 12 October 2019.

With her joyously irreverent live-action reinterpretation of the famous 16th-century puppet show, writer/director Mirrah Foulkes turns the traditional story of Punch and Judy on its head and brings to life a devilishly delightful tale, starring Mia Wasikowska (Crimson Peak, Alice in Wonderland, Jane Eyre) and Damon Herriman (Once Upon A Time in Hollywood, Mindhunter, Top of the Lake).

In the outlandish town of Seaside, located nowhere near the coast, puppeteers Judy and Punch are trying to resurrect their marionette show. The show is a hit due to Judy's superior puppeteering, but Punch's driving ambition and penchant for a drink lead to an ill-fated turn of events that Judy must avenge.

An outstanding debut feature from Mirrah Foulkes, JUDY & PUNCH is a darkly funny tale that blends elements of fantasy and the absurd to craft an entirely unique concoction that constantly subverts viewer expectations, propelled along by a vibrant and hugely inventive original score by Francois Tetaz. 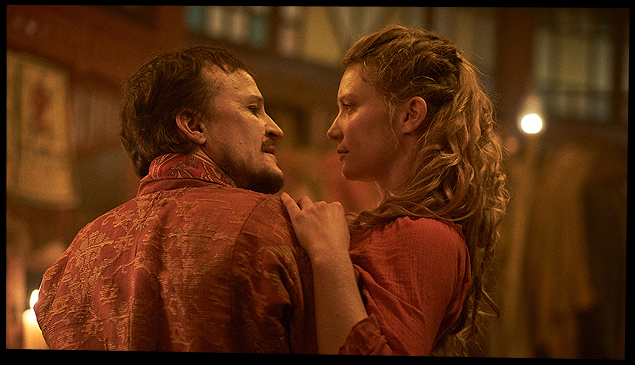 Mia Wasikowska gained international recognition as the title character in Tim Burton’s 2010 retelling of the Lewis Carrol novel, Alice in Wonderland, alongside Johnny Depp and Anne Hathaway, as well as in James Bobin’s 2015 sequel, Alice Through the Looking Glass. She has since continuously moved between prestigious arthouse and studio blockbusters, with credits including Crimson Peak, Jane Eyre, Only Lovers Left Alive, The Double, Maps to the Stars, to name a few.

Damon Herriman is a renowned Australian film and TV actor. His exceptional performance in JUDY & PUNCH comes hot off the heels of his two recent portrayals of Charles Manson in Netflix’s critically acclaimed series Mindhunter, and Quentin Tarantino’s lauded Once Upon A Time in Hollywood. Further credits also include Sundance favourite The Nightingale, The Water Diviner alongside Russell Crowe, and the critically acclaimed The Square (2008).

Mirrah Foulkes is an award-winning writer and director, winning multiple awards for her short films Trespass (2016), Florence Has Left the Building (2015) and Dumpy Goes to the Big Smoke (2012). Her acting credits include The Crown, Top of the Lake, Animal Kingdom and The Turning among others. JUDY & PUNCH is her debut feature film.

The film is produced by Michele Bennett, Nash Edgerton and Danny Gabai for Vice Studios, Blue-Tongue Films and Pariah Production. Bennett’s recent credits include Mr Inbetween TV series, The Magician, Drift and The Mule. Foulkes and Edgerton are both part of Blue-Tongue Films, a filmmaking collective, which includes Joel Edgerton and David Michôd and whose recent credits include The King, Boy Erased and War Machine among others. Danny Gabai is the Head of VICE Studios US and EVP at VICE Media, whose recent feature productions include Netflix’s documentary Fyre, Harmony Korine’s The Beach Bum, Netflix’s Jim & Andy: The Great Beyond, for which Gabai received an Emmy nomination for best Documentary, and Gaspar Noe’s Climax, among others.