Filming began in Italy on 20 August, utilising locations in Florence, Siena, Taranto and Rome before moving to the United Arab Emirates. Production continued in Abu Dhabi on 12 November and moved to sites in Al Ain, Liwa and Ras Al Khaimah before completing principal photography on 5 December, in the Abu Dhabi City Centre. In total, 24 locations were used during the course of the 27 day shoot in Abu Dhabi.

The production worked closely with the Abu Dhabi Film Commission which offers a 30% rebate on production spend in Abu Dhabi as well as twofour54, which provided full production services, including location assistance, securing permits and suppliers as well as catering, accommodation and travel. 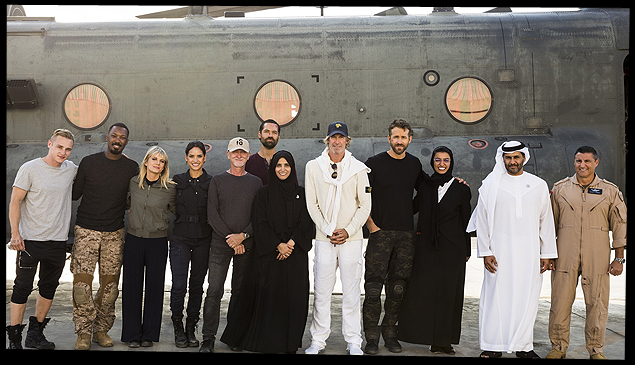 “The UAE, and Abu Dhabi in particular, has provided diverse backdrops that have added to the richness of our production,” said director Michael Bay. “I look forward to returning to the UAE in the future to spend time exploring all that the country has to offer.”

“This has been a fast-paced and dynamic production, and Netflix and Skydance have been fantastic partners,” he added. “I couldn’t be more appreciative. I especially want to thank my incredible cast and crew for their hard work and devotion to this project.”

“Making this movie was an experience I will never forget,” says Ryan Reynolds. “I was impressed with the local crew and artisans we’ve met throughout our journey. Together we’ve made an exciting movie with equal parts action and humor that will appeal to a diverse audience.”

H.E. Maryam Eid AlMheiri, CEO of Media Zone Authority – Abu Dhabi and twofour54, said “We are now a destination of choice for major film productions, many of whom have travelled thousands of miles to benefit from Abu Dhabi’s striking scenery, pool of talent and welcoming environment."

"We strive to provide a seamless experience to filmmakers, so they can focus on crafting their unique stories. Assisting Netflix to smoothly film 6 Underground across 24 locations over 27 days is testament to our ability to strategically manage highly complex projects to a tight deadline,” AlMheiri added.

The film is currently in post-production in the United States and is slated for release on Netflix in 2019.

Senior officials visited the set at a military base during filming in Abu Dhabi.

About Netflix
Netflix is the world's leading internet entertainment service with 130 million paid memberships in over 190 countries enjoying TV series, documentaries and feature films across a wide variety of genres and languages. Members can watch as much as they want, anytime, anywhere, on any Internet-connected screen. Members can play, pause and resume watching, all without commercials or commitments.