The Royal Shakespeare Company’s production of Matilda The Musical has released a video of some of the current young performers along with Miss Honey (Gina Beck) singing ‘When I Grow Up’ from their homes during theatreland shutdown.

Winner of 99 international awards including 24 for Best Musical, Matilda The Musical has been seen by over 10 million people across more than 90 cities worldwide.  It has become the Cambridge Theatre’s longest running production and one of the top twenty longest running musicals in the West End having now welcomed over 3.5 million audience members in London.

Written by Dennis Kelly, with music and lyrics by Tim Minchin, and direction by Matthew Warchus. The production is designed by Rob Howell, with choreography by Peter Darling, orchestrations, additional music and musical supervision by Christopher Nightingale, lighting by Hugh Vanstone, sound by Simon Baker and the special effects and illusions are by Paul Kieve. 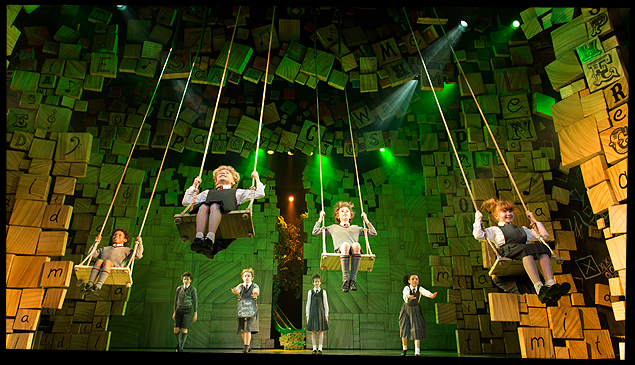 Matilda The Musical is still widely considered to be one of the most innovative British Musicals of the century. Adapted from Roald Dahl’s much loved 1988 book and commissioned by the Royal Shakespeare Company, the musical premiered at the RSC’s Stratford-upon-Avon home in 2010, before transferring to the West End in 2011, where it opened to rave reviews.

Bursting with revolting fun and naughtiness, it tells the story of Matilda, the strong, determined heroine, who stands up to her bullies. This brave bookworm outwits her ghastly parents The Wormwoods and horrible headteacher Miss Trunchbull using her vivid imagination, intelligence and magical powers. Dahl’s themes of rebellion, bravery, protest and standing up for what you believe in are more relevant in 2020 than ever before.

Matilda The Musical swept the board at the 2012 Olivier Awards, with a record-breaking seven awards, and won four Tony Awards and a Tony Honor for Excellence in the Theater for the four girls sharing the title role on Broadway. It has since toured to Australia, New Zealand and China and played its first non-English language production in Seoul, South Korea in 2018/19.

Matilda The Musical is produced by the Royal Shakespeare Company with André Ptaszynski and Denise Wood as Executive Producers. The production was developed with the support of Jeanie O’Hare and the RSC Literary Department.

The work of the RSC Literary Department is generously supported by The Drue and H.J. Heinz II Charitable Trust