Venom enjoys another week at the top of the Official Film Chart, outselling its closest rival by over 16,000 copies on digital downloads alone.

At Number 2, with 85% physical sales, is Jack Black’s The House With A Clock In Its Walls which climbs seven spots to take second place. It’s 5,000 sales ahead of The Predator which climbs 22 spots to 3, following its release on DVD and Blu-ray on January 28.

Next up it’s the seemingly unstoppable chart veterans, The Greatest Showman (4) and Mamma Mia! Here We Go Again (5) ahead of Mile 22 (6) which races up 31 positions thanks to its physical release.

Brand new and on digital download alone, is Night School starring Kevin Hart and Tiffany Haddish - a hilarious comedy about a group of adults who take up evening classes at the local high school in order to earn the diplomas they didn’t get the first time around. 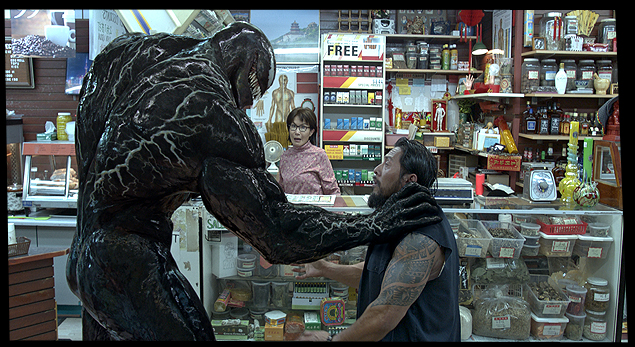 King Of Thieves steals a third week on the Top 10, dropping three places to Number 8, and Jurassic World: Fallen Kingdom hangs in there at Number 9. Finally, Ryan Reynolds is still causing mayhem in Deadpool 2 at Number 10.

This week’s Official Film Chart online show features a sneak peek at Jamie Lee Curtis’ latest stint as Laurie Strode in Halloween (2018), a 40-years-later direct sequel to the 1978 original with a brand new timeline. It’s available to download and keep from February 11, and on disc from February 25.

The chart - the result of a partnership between the Official Charts Company, the British Association for Screen Entertainment and incorporating data from retailer members of the Entertainment Retailers Association - is published on OfficialCharts.com every Wednesday at noon and counts movie downloads from services including Amazon, iTunes, Sky Store, Virgin Media Store, Rakuten TV, Talk Talk TV, as well as 4K UHD, Blu-ray and DVD disc sales from all high street and online retailers.

About British Association for Screen Entertainment
The British Association for Screen Entertainment (BASE), previously known as the British Video Association (BVA), has a proud heritage representing the interests of publishers and rights-owners of pre-recorded filmed entertainment for the past 35 years. In a world of evolving technology and fluid consumer behaviour, the primary objective of the British Association for Screen Entertainment is to champion the growth of screen entertainment across disc and digital, while maintaining a business environment with the fewest regulatory burdens. Our members already represent the vast majority this £2.69 billion video market alongside Affiliate and Associate members from a host of critical industry stakeholders. We welcome new members from across the audio-visual ecosystem, from smaller independents to established players, through to service providers, broadcast platforms and more, offering flexibility through tiered levels of membership to suit different needs. For more information visit www.baseorg.uk