SKY CINEMA Releases The Trailer For Original Film FOUR KIDS AND IT Ahead Of Its Launch On Sky Cinema, NOW TV And Cinemas On April 10 | The Fan Carpet

SKY CINEMA Releases The Trailer For Original Film FOUR KIDS AND IT Ahead Of Its Launch On Sky Cinema, NOW TV And Cinemas On April 10

Based on the book by Jacqueline Wilson and starring Russell Brand, Matthew Goode, Paula Patton and the voice of Sir Michael Caine

The Fan Carpet are excited to bring you the debut Trailer and Photo from Andy De Emmony's adaptation of Jacqueline Wilson's beloved classic FOUR KIDS AND IT, Ahead of its release in Cinemas, Sky Cinema and NOW TV this April, courtesy of Sky Cinema!

New couple Alice (Patton) and David (Goode) take their less than enthusiastic children on a family holiday to a Cornish cottage to meet each other for the first time.  The holiday takes an unexpected turn when, on the local beach, the kids discover a magical and very grumpy Psammead (Caine), a creature with the power to grant magical wishes.  Unfortunately, they also run into local aristocratic oddball Tristan (Brand), who wants to capture the Psammead for his own gain.  The ensuing adventure brings the new siblings together and helps them to accept their parents’ newfound happiness. 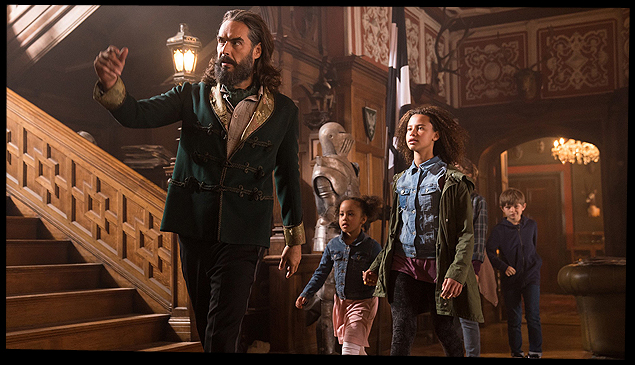 Directed by Andy De Emmony, Four Kids and It is produced by Julie Baines of Dan Films and Anne Brogan of Kindle Entertainment and co-produced by Jonathan Taylor and Paul Donovan.  Jwanwat Ahriyavraromp for T&B Media Global, Tannaz Anisi and Gregory R. Schenz for 13 Films and Geraldine East were Executive Producers.  The film is written by Simon Lewis (Tiger House, The Anomaly) with additional writing by Mark Oswin (Danger Mouse, 4 O’clock Club).  Sky acquired the film from 13 Films.

About Sky
With 24 million customers across seven countries, Sky is Europe’s leading media and entertainment company and is proud to be part of the Comcast group. Our 31,000 employees help connect our customers with the very best of Sports, News, the arts and to our own local, original content. Following the success of Sky originals like Chernobyl, Patrick Melrose, Das Boot and Gomorrah we launched Sky Studios and now plan to more than double our investment in original drama and comedy over the next five years.

Our technology allows customers to watch what they want, when they want, how they want, and as we connect millions of families to content they love, it is our responsibility to do it safely – that’s why we offer services like Sky Broadband Buddy and the Sky Kids app.  And our online streaming service, NOW TV, brings viewers all the enjoyment of Sky with the flexibility of a contract-free service.

We also believe that a company of our scale has a responsibility that goes beyond our business, and into the community. Our Sky Ocean Rescue campaign has reached millions across Europe, we’re on track to be free of single-use plastic by 2020, we’re investing £25million over five years in ocean-saving tech and we’re a proud employer – recognised by The Times and Stonewall for our approach to inclusivity.

About 13 Films
13 Films is an international distribution and finance company based in Los Angeles founded by Tannaz Anisi.