STARZPLAY today announced that the new genre-bending horror comedy “Shining Vale” will premiere on Sunday, 6 March, 2022 on the STARZPLAY premium streaming platform across its complete footprint in Europe, Latin America and Japan.

About “Shining Vale”
Pat and Terry Phelps (Cox and Kinnear) cash in their life savings and move from a cramped apartment in Brooklyn, to an old Victorian mansion in Shining Vale, Connecticut as a last-ditch effort to save their marriage after Pat’s torrid affair with Frank, their young hot handyman who came over to fix the sink while Terry was at work. To make matters worse for Terry, Frank never fixed the sink, yet still charged him for it!

Moving to smalltown Connecticut, Gaynor and Jake, are pissed and as disconnected as you can get. Terry tries to unite the family, but the pushback is real. Pat is losing what little handle she’s had on the kids, Gaynor wants Pat dead, and Jake has become a zombie from his addiction to screens, while Terry is too consumed with moving on to see that Pat is losing a grip on herself as well.

Buying a 200-year-old house that was on the market for almost three years and sold for more than $250K below asking seemed like a good idea on paper, but Pat senses that the Phelps are not alone; especially when an old-fashioned-looking woman appears hovering outside their family room window.

The Phelps quickly learn why the agents were so motivated to sell the house for a fraction of the asking price. Seems a few details were glossed over, including a triple murder-suicide and a host of other atrocities they neglected to mention. But neither Terry nor the kids seem to notice that something is horribly wrong with the house; only Pat can see things move and hear the bumps in the night. Convinced she’s either depressed or possessed – turns out the symptoms are exactly the same – she’s also the only one who sees the spirit of the person who committed these murders: Rosemary, a Fifties housewife who may or may not be trying to take over Pat’s body.

Everyone has their demons, but for Pat Phelps, they may be real. 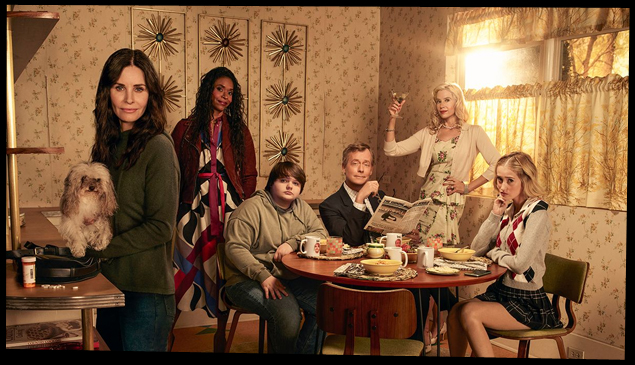 “Shining Vale” is executive produced by Jeff Astrof from Other Shoe Productions, Sharon Horgan and Clelia Mountford (“Motherland,” “This Way Up,”) from Merman, Aaron Kaplan (“The Chi,” “The Neighborhood”) and Dana Honor (“A Million Little Things,” “The Unicorn”) from Kapital Entertainment. Courteney Cox is producer. Astrof wrote the pilot teleplay, from a story by Horgan & Astrof. The series is produced by Warner Bros. Television and Lionsgate Television in association with Other Shoe Productions, Merman and Kapital Entertainment.

“Shining Vale” will air on STARZ in the U.S. and Canada and on its international streaming platform STARZPLAY across Europe, Latin America and Japan.

STARZPLAY subscribers have access to an exclusive line-up of premium programming including STARZ Original limited series “The Spanish Princess” and the explosive second chapter in the “Power” Universe, “Power Book II: Ghost” starring Mary J. Blige the same day they launch in the US; 2020 Emmy®-nominated series such as the thought-provoking millennial comedy “Ramy” from Muslim-American comedian Ramy Youssef, the genre-bending period dramedy “The Great” starring Elle Fanning and Nicholas Hoult, and the award-winning series “The Act” starring Academy Award® Winner Patricia Arquette and Joey King; plus a blockbuster movie library featuring thousands of titles.


ABOUT STARZPLAY
STARZ continues to grow its global footprint with its ongoing expansion of the STARZPLAY international premium streaming platform. STARZPLAY’s rapid expansion into more than 59 countries since its launch in May of 2018 is driven by its ability to provide subscribers access to the “best in global SVOD.” The content offering is comprised of the entire catalog of STARZ premium content, with upcoming STARZ Originals airing exclusively on STARZPLAY day-and-date with the US, exclusive award-winning and critically acclaimed first-run series and a vast library of blockbuster feature films. STARZPLAY is available through its direct-to-consumer app in 13 countries; on global digital broadcast services, multi-channel video distributors, telecommunications companies; and other online and digital platforms across its footprint spanning across Canada, Europe, India, Indonesia, Japan and Latin America.