Studio Ghibli’s EARWIG AND THE WITCH Will Be Available As Limited Collector’s Edition, Limited Steelbook, Blu-Ray & DVD | The Fan Carpet

Elysian Film Group Distribution the Studio Ghibli feature film animation EARWIG AND THE WITCH, directed by Goro Miyazaki (FROM UP ON POPPY HILL, TALES FROM EARTHSEA), will be available to own in the UK and Ireland from 27th September. The film is based on the children’s novel of the same name by Diana Wynne Jones (HOWL’S MOVING CASTLE) and marks Studio Ghibli’s first entirely 3DCG animated feature. Produced by Studio Ghibli co-founder Toshio Suzuki with planning from Miyazaki’s father, the legendary Hayao Miyazaki (SPIRITED AWAY, MY NEIGHBOUR TOTORO), EARWIG AND THE WITCH is the third solo feature from Goro Miyazaki which tells the story of a courageous young orphan forced to live with a selfish witch. 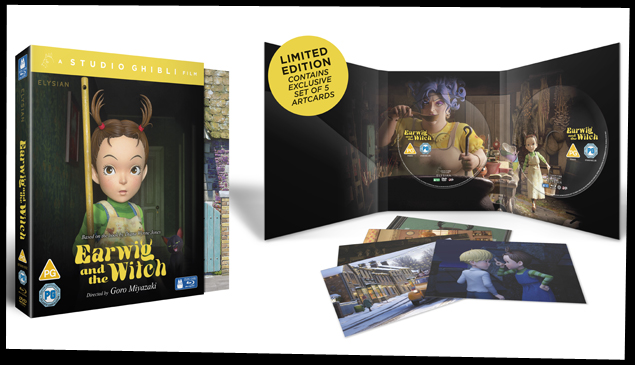 Growing up in an orphanage in the British countryside, Earwig has no idea that her mother had magical powers. Her life changes dramatically when a strange couple takes her in, and she is forced to live with a selfish witch. As the headstrong young girl sets out to uncover the secrets of her new guardians, she discovers a world of spells and potions, and a mysterious song that may be the key to finding the family she has always wanted.

Young readers can also discover the magical story of EARWIG AND THE WITCH by Diana Wynne Jones (Howl’s Moving Castle, Charmed Life). The book has been re-printed to tie in with the UK release of the film and it is available now in paperback via Harper Collins.

Earwig And The Witch Film Page

EARWIG AND THE WITCH IS AVAILABLE ON SEPTEMBER 27

Perkins has over two decades of experience in the international film business, spanning all aspects of the industry including development, production, acquisition, marketing and distribution. He co-founded UK indie Optimum Releasing in 1999, which was acquired by the Vivendi-owned STUDIOCANAL in 2006, and then assumed the role of UK CEO for the company in 2010 and departed in 2018 to form Elysian Film Group.