Two teens with different genetic conditions are forced to form a friendship.

Lola, a young girl with depression, is told by her mother to do something productive during the long holidays. She suggests spending some time with Zack, a childhood friend who Lola hasn’t seen in ages and though reluctant to accept at first, Lola finally agrees to get her mother off her case. The two teens each have genetic conditions which affect their lives in different ways and as they spend more time together, they start to grow fonder of each other, though Lola hates to admit it to her mother.

Where did the idea and themes behind the movie Faulty Roots stem from and what was the writing
process like for you?

The idea came from me wanting to tell a story about something important, and mental health is a topic that I’ve
always felt very strongly about. I also knew that I didn’t want it to just be about mental health, I wanted it to be about
friendship and the importance of having someone being there for you. I wrote it in one go and actually didn’t change
much from the first draft other than a few spelling mistakes.

You wrote, directed, and produced the film - What was the most challenging part?

Directing was definitely the hardest as I was trying to make sure the production as a whole was still running
smoothly, that the other cast members were happy and prepared and that I did my character justice. Luckily I had
two amazing associate directors Abigail Vaughan and Lorna Reid throughout the duration of the shoot so they
really helped me out.

Have you always wanted to be a film maker?

I knew that I always wanted to be involved with films but I never knew exactly how. I’ve loved acting for a long time and that’s always been my main focus, but I wanted to be an Art Director before, then a writer, now a producer, I just love filmmaking! 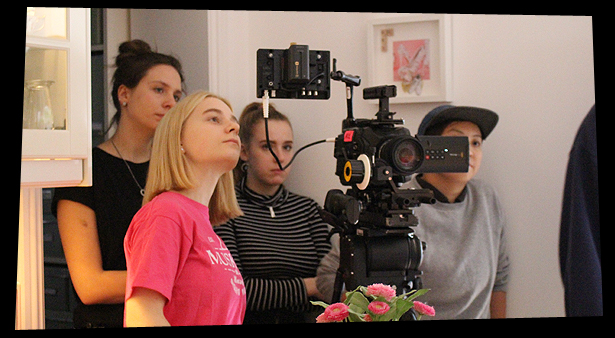 About Ella Greenwood
Ella Greenwood is a filmmaker born and raised in London, England. Faulty Roots is her first- time writing, directing and producing a film. She started working on the film after finishing her A-Levels in the summer of 2019, and the film was shot in December that year.