Charlotte Field (Charlize Theron) is one of the most influential women in the world. Smart, sophisticated, and accomplished, she’s a powerhouse diplomat with a talent for…well, mostly everything. Fred Flarsky (Seth Rogen) is a gifted and free spirited journalist with a self-destructive streak. The two have nothing in common, except that she was his baby sitter and first crush. When Fred unexpectedly reunites with Charlotte, he charms her with his self-deprecating humor and his memories of her youthful idealism. As she prepares to make a run for the Presidency, Charlotte impulsively hires Fred as her speechwriter, much to the dismay of her trusted advisors.

A fish out of water on Charlotte’s elite team, Fred is unprepared for her glamourous and high stakes lifestyle. However, sparks fly as their unmistakable chemistry leads to a round-the-world romance that becomes embroiled in a series of dangerous and outlandish incidents.

There have been a lot of cringe-worthy moments to grace our screens over the years, from body fluids appearing in places they shouldn’t (ahem)… to the downright hide-behind-your-hands scenes that have us feeling red faced for hours after.

To celebrate the launch of LONG SHOT on DVD and Blu-Ray on 9th September, which sees Seth Rogen’s Fred Flarsky find himself in a sticky situation, here is a countdown of the 10 grossest on-screen moments...

10 – I Got Peed On, American Pie 2
Stiffler (Seann William-Scott) cannot get through a house party without his attempts to score backfiring. Here he thinks he’s playing dirty by getting a girl to pour champagne over his head, but in reality, she has been knocked out and the liquid Stiffler mistakes for champagne is actually John (John Cho) relieving himself over the balcony.

9 – Andy Describes His Freak, The 40-Year Old Virgin Andy (Steve Carrell) doesn’t exactly keep his cool when a poker conversation shifts towards odd sex stories. Though he tries desperately to fit in, his long and exaggerated story about what he thinks would happen during sex, and a womans “breasts like sandbags” gives away the fact that he is still a virgin and makes for truly cringe-worthy viewing.

8 – A Mouthful, The Sweetest Thing
Getting intimate with a partner is something that you wouldn’t really want anyone to see, let alone your two best friends, a police officer, ambulance driver, a vicar and pretty much everyone else in the neighbourhood. This was a harsh reality for Jane (Selma Blair), when she and her partner get stuck in the act, all set to the dulcet tones of Aerosmiths “I Don’t Wanna Miss A Thing”.

7 – Perfecting The Snog, Angus, Thongs And Perfect Snogging
Everyone remembers their first kiss, in particular – how bad it was. Georgia Nicolson (Georgia Groome) wanted to get ahead of the game for her first kiss with her crush Robbie (Aaron Taylor-Johnson), so she enlists resident “kissing expert” Peter Dyer (Liam Hess) to teach her how to snog properly. What follows is a mortifying display of tongue and saliva.

6 – Turbo-Lax, Dumb & Dumber
When Lloyd (Jim Carrey) discovers that Harry (Jeff Daniels) has secretly stolen his crush, he decides to play dirty. Harry is then forced to wreck his date - and her toilet - in order to take a pretty aggressive trip to the toilet. As if that wasn’t bad enough, Harry gets the unfortunate news that the toilet is broken and won’t flush.

5 – Barf-O-Rama, Stand By Me
In lieu of the usual campfire horror story, these kids instead discuss a pie eating contest gone wrong. When one contestant gets stuffed to the brim with blueberry delight, all hell breaks loose - or at least all lunches, causing a domino effect of vomit. Not one for the light stomached…

4 – Warm Apple Pie, American Pie
When the hormones kick in, teenagers will look for any means by which to simulate sex. In Jim’s case, infamously played by Jason Biggs, if that means ruining a perfectly good dessert, then the sacrifice is worth the reward. Though this teen sex comedy featured plenty of memorable moments, this one takes the cake (or should we say pie…) for the grossest.

3 - Food Poisoning, Bridesmaids
Wedding dress shopping is already stressful, but add in a dodgy stomach and not enough bathrooms and you have yourself a recipe for disaster. A beautiful bonding moment turns into sweaty bowel-upsetting agony as each one takes her turn to become violently ill.

2 - THAT Zipper Scene, There’s Something About Mary
Ted’s prom date with Mary (Cameron Diaz) gets off to a bad start when his family jewels get stuck in his pants zipper. While his dream date and her family watch in horror, Ted is wheeled off to the hospital in what might be the most awkward prom date in history.

1 – A New Type Of Beard Gel, Long Shot
Long Shot’s most cringe-worthy moment sees Seth Rogen’s character Fred Flarsky take some time for himself while watching on-screen partner Charlize Theron give her speech. Taking inspiration from another cringe-worthy scene from There’s Something About Mary, as Fred finishes the act, he gets his stuff stuck in his beard. 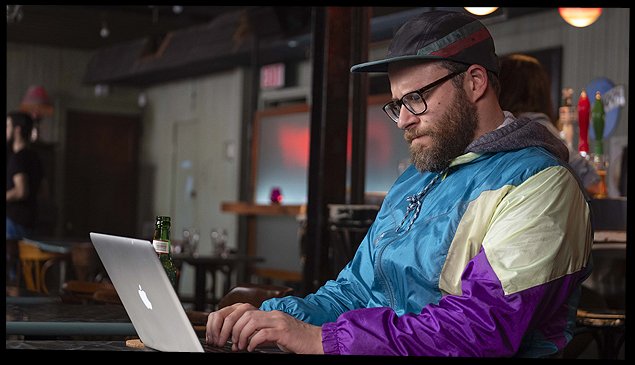 LONG SHOT IS OUT NOW ON BLU-RAY AND DVD