Exploding onto the action scene in 2000 with his instant cult classic zombie yakuza flick, Versus, director Ryuhei Kitamura marked himself as a name to look out for when it comes to extreme, over-the-top action cinema. With his latest action thrill-ride, The Doorman, Kitamura shows no signs of relaxing the pace as he delivers another fight-filled thriller, packed with explosive action and hard-hitting combat scenes.

The Doorman follows Ruby Rose (John Wick: Chapter 2) as a traumatised ex-Marine who takes a job in a luxury New York City high-rise where her estranged family live. She’s soon called back into action in order to outsmart and battle a group of art thieves and their ruthless leader (Jean Reno, Léon: The Professional, Ronin) as the criminal gang turns ever more violent and ‘the doorman’ is forced to call upon her deadly fighting skills as she heads towards an explosive showdown… 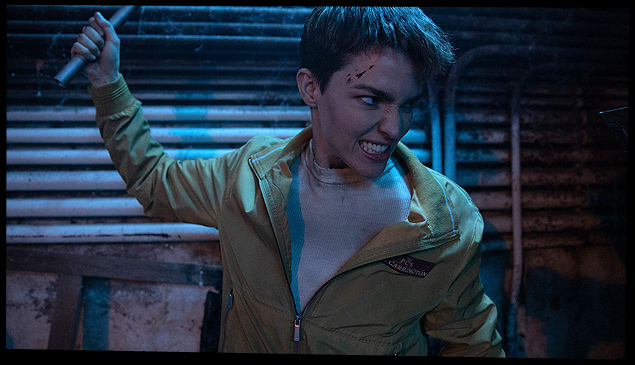 To celebrate the release of Kitamura’s latest action-packed fight-fest, out on Digital Download 18 January and DVD 25 January, we’ve taken a look at some of the wildest moments in the director’s frenzied film career...

The outrageous, wild and bloody cult classic that made director Ryuhei Kitamura’s name. Set in the Forest of Resurrection, which contains the 444th portal to hell, an escaped prisoner enters the forest only to run headfirst into a gang of particularly vicious yakuza. Defending a girl from the gangster thugs, the prisoner is forced to kill one of them… only to see his dispatched foe quickly return to life. Yep, that’s right, this is a film about Yakuza Zombies! What follows is a fast-paced bloody action spectacle in which crazed yakuza, deadly assassins, zombie minions and 10th century samurai engage in hyper-stylised combat. The film made a star of Tak Sakaguchi who would become one of Japan’s go-to leading men when it comes to action madness appearing in further cult hits like Tokyo Gore Police and Yakuza Weapon, but really this is Kitamura’s show and his twirling camera, emphasis on poetic gunplay and insane story make Versus a must see for fans of out-there cinema.

Director Kitamura’s first stabs at the ‘jidaigeki’ Japanese period film in 2003 saw him producing two madcap fight-fuelled samurai movies, Aragami (produced on a minimal budget following a booze-fuelled challenge by a producer) and hit-manga adaptation Azumi. The story of an orphaned girl raised by a deadly clan of assassins to take out vicious warlords in violence-filled feudal Japan, Azumi proved the perfect fit for Kitamura’s brand of frenetic screen carnage. Filled with spectacular fight scenes as Azumi and her assassin allies take on black-clad ninja and sword-wielding mercenaries galore, no enemy proves more memorable than the flamboyant, cackling swordsman Bijomaru Mogami (Onagiri Joe, The World of Kanako, Air Doll). When Azumi faces Bijomaru for a climactic confrontation after having taken out an army of samurai thugs, her sword is, literally, aflame. Unleashing her dual-bladed katana she sets to work on sadist Bijomaru as he cackles and twirls his way across the screen. At one point the director takes his trademark roving camera to new extremes with the fighters facing off on a suspended plank with the camera spinning dizzyingly around them. The final sword-strike leaves both Bijomaru and the audience’s heads spinning.

Kitamura took the reins of this epic 28th instalment of the monster Japanese film series in 2004. A big fan of classic Godzilla movies, especially those from the 1970s, the director felt that the series had been lacking in the 80s, 90s and 2000s and wanted to bring his own brand of over-the-top chaos to the franchise. Godzilla: Final Wars did not disappoint as a whopping total of 15 kaiju creatures do battle across the globe, causing untold destruction. The film gives us the biggest monster smash-down in the franchise’s history with Godzilla, Monster X, Keizer Ghidorah, Ebirah, Rodan, Mothra, Gigan, King Caesar, Anguirus, Minilla, Kumonga, Kamacuras, Manda, Hedorah and Zilla (a take on Hollywood’s much maligned 1998 effort!) all getting involved in the record-breaking havoc! Choosing practical SFX over CGI with plenty of smashed model building rubble left in the suitmation kaiju’s wake, this is the perfect throwback to the King of the Monsters’ golder age.

Adapted from a Clive Barker story of the same name, The Midnight Meat Train sees Kitamura in full-on gore-mode as the psychopathic ‘Subway Butcher’ (played by footballing legend Vinnie Jones) as he hunts down late night commuters on a metro train. Armed with a meat-tenderiser and sporting a sadistic grimace, Jones pulverises his way through a high volume of human meat in this blood-soaked tale but perhaps the stand-out moment is when he sends the eyeball of one commuter flying after a hefty whack to the head. Rendered in detailed CGI and displayed in slow-motion as the bloody ocular globe flies towards the camera, this is one wild Kitamura moment which is certain to put you off your dinner. Wince-inducing and unmissable!

In his ultra-gory horror flick No One Lives, Kitamura cast Luke Evans as a crazed, anonymous killer called ‘The Driver’ who’s out for bloody revenge. The film tells the story of a man and his wife Betty, who are driving across the US. They encounter a group of plucky criminal teens who, assuming the couple are wealthy, kidnap them for ransom money. But when the plot goes awry and Betty ends up dead the unnamed man (The Driver) begins to enact his vengeance upon those who wronged him. In one jaw-dropping moment after the initial kidnapping when one of the teens ends up dead and their body is transported by the police, the audience experiences a truly WTF moment when the lifeless body starts wriggling and none other than Luke Evans emerges, encased in the dead man’s skin and covered in head-to-toe in gore! We’re assuming Disney missed this one when they cast him in family-favourite Beauty and the Beast!