Directed by Paul Thomas Anderson, Anima is the new “one-releer” created by Thom Yorke for the release of the homonymous third solo album of the artist.

After producing the soundtrack for Guadagnino’s Suspiria remake, Yorke is releasing his new album Anima, an electric fluid and emotional album that comes after a long period of creative silence for the artist. Once again Yorke is collaborating with Suspiria’s choreographer Damien Jalet to create a short silent movie featuring three of his new song “Not the News”, “Traffic” and “Dawn Chorus”. 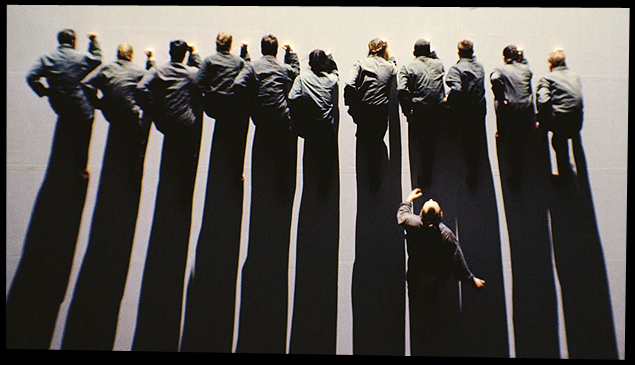 However, the singer’s dull routine gets abruptly interrupted when Yorke meets the eyes of a woman. However, before he can even have to chance to act, their journey ends. In the mist of rushing out of the train, she leaves behind her bag and Yorke starts his quest to find her.

From that point forward, the short video clip follows Yorke through his dystopian, dream like quest to follow and find this mysterious woman in a world where everyone is against him and even the elements are posing as obstacles. The three song from the album fill in the silence and make for the perfect soundtrack of this elaborated video clip.

The choreography is fluid and powerful and it uses the help of the scenography to create an illusion of total absence of gravity as if following the main character through his chaotic dream.

To highlight this sort of dream state the location changes throughout the short clip. Going from the London’s chaotic station, to the busy streets of Paris and the quiet tram in Prague, in which Yorke finally shares a meaningful moment with the mysterious woman.

As a possible representation of our modern society, lost and trapped in a universal routine, Anima feels like a journey to discover human connection in a world in which it is easy to isolate yourself and get lost in the crowd.

ANIMA screens TONIGHT at Cineworld IMAX in Leicester Square at 7:40pm for a free screening.

Tickets are available on a first come, first served basis.