The Kraken Rum has teamed up with Iwan Rheon - best known for his role in Game of Thrones - to become the leading character in its new ‘In Real Life’ video game ‘Screamfest 4: The Kraken’s Revenge’ due for release this Halloween - which will see people remotely control the every move of the actual Iwan Rheon live.

The real life video game is the brainchild of legendary Rockstar Games creator, John Zurhellen who is behind classics such as Grand Theft Auto IV, Manhunt 1 & 2 and Red Dead Redemption

The terrifying real life game will see fans stepping up in support of The Beast and seizing control of a real-life human being in a desperate attempt to guide the tortured soul through a maze of difficulties and dangers to escape The Kraken’s arch-nemesis, The Balthazoid

Iwan Rheon will only take part in slots on Wednesday 28th October, however the game will run over four high-octane evenings from Wednesday 28th until Friday 30th October, with tickets for the 10-minute slots available to purchase at The Beast’s online home ‘The League of Darkness’.

Just when you thought 2020 couldn’t get any scarier, think again… This Halloween The Kraken Black Spiced Rum is teaming up with Iwan Rheon to star in its terrifying new 'real life video game' - ‘Screamfest 4: The Kraken’s Revenge’. Using their smartphones or laptops, people will be able to remotely control the every move of the Game of Thrones actor live as he is pursued by a horrific creature through a nightmarish real location.

Created by legendary games director John Zurhellen of Grand Theft auto IV and Manhunt 1 & 2 fame, this one of a kind real life video game will be a world first as players will be able to remotely issue commands to Hollywood actor Iwan Rheon and watch him respond immediately on a live video link. 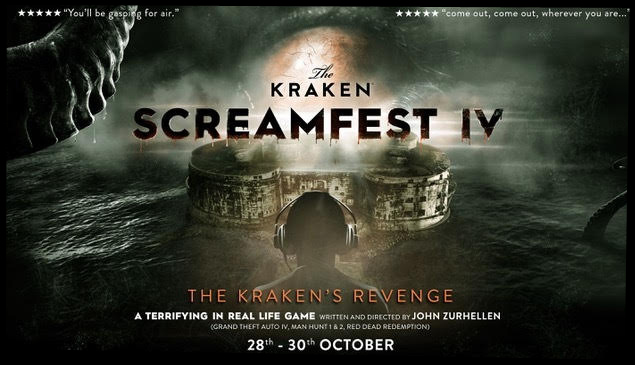 Iwan Rheon said, “I’m used to playing a character that did all the controlling but now the tables are turned. I’ll be at the mercy of people controlling my every move online from anywhere in the country, sending me from room to room in a particularly creepy location while I’m hunted by a monster. I do wonder how many Kraken fans will send me to my doom and how many will save me!”

With both The Mighty Beast and John Zurhellen keeping the hideous and horrid storylines close to their depraved, tormented hearts until the launch, fans of The Kraken will have to wait until the launch to find out first-hand what’s in store for those brave enough to go toe-to-toe with The Balthazoid.

To play ‘Screamfest 4: The Kraken’s Revenge’, visit The Mighty Kraken’s online hub, The League of Darkness, to snatch a ticket from 9am on Friday 9th October. Iwan Rheon will be ‘playable’ from 4pm – 6pm on October 28th and each player will get 10 minutes to remotely control the actor’s every action in the innovative horror experience.

In exchange for tickets (priced at an exceedingly generous £10 each per 10-minute slot),this exclusive offering will include The Beast’s bespoke game-guide, ingredients and just enough delicious Kraken Rum to mix it altogether (not the game-guide, though) to create an exclusive Halloween cocktail. After all, if you’ve escaped The Beast’s archenemy, received eternal gratitude from The Kraken himself and are revelling in the glory of being an official saviour of human souls…. You’re going to need a delicious cocktail, right?

If, like some scaredy-cats, you’re worried you’ll spend more time cowering behind the sofa than teaming up with The Beast to outwit the deadly Balthazoid, then why not watch others play instead? Each slot of the five-day experience will be streamed live, so the terrifying spectacle will be available for all to witness.

The Kraken’s online IRL game, ‘Screamfest 4: The Kraken’s Revenge’ will run from Wednesday 28th October until Friday 30th October, with slots running from 5pm each day.

Don’t fret if you miss out on the first round of tickets, The benevolent Beast will be releasing additional gaming sessions, so keep your eyes firmly on The Kraken’s social channels in the coming weeks via Twitter, Instagram and Facebook.