THESE NEW PURITANS UNITE WITH INDIRA VARMA, MAXINE PEAKE AND JOHN HEFFERNAN FOR E.P. RELEASE OF FOUR NEW SINGLES FROM INCIDENTAL: MUSIC FOR THE STAGE

Their Brave New World score was described as “grand, intrusive, incredible” (Vice), “powerfully ambient” (The Scotsman), “dazzling” (Observer) and “rich and disturbing” (Daily Telegraph) when performed live. These original compositions have since been recorded and are now being released on CD and digitally for the first time. 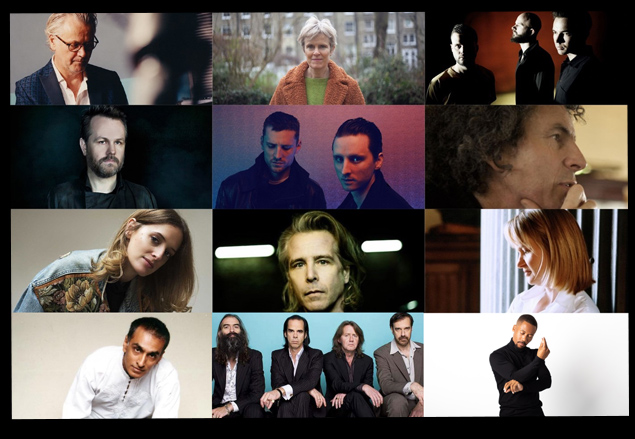 Now, as the theatre recovers from the devastating impact of the pandemic, they have partnered with Atlantic Screen Music to bring together those pieces together as a classical and electronic music album, specially recorded with spoken performances of the monologues from the plays which inspired them by actors including Judi Dench, Amanda Seyfried, Felicity Jones, Giles Terera, Patricia Routledge, James Norton, Sharon D Clarke, Lesley Sharp, Stephen Fry, Indira Varma, Maxine Peake and Simon Russell Beale.

90 years after Aldous Huxley wrote Brave New World, his novel shines a blazing light on our present. Envisioning a dystopian future, where a genetically engineered class system has finally brought order and stability to the world, Huxley’s groundbreaking novel imagined a society without family, religion or war. Lust and pleasure have replaced love and art. People are safe, healthy and not afraid of death. They get what they want, and they never want what they can’t have. Everyone is happy. Yet when this stability is threatened, one young woman learns the pain of love and one young man gives in to the love of pain.

INCIDENTAL: Music for the Stage raises vital funds to support Northampton Royal & Derngate Theatres’ reopening, helping the venue to recover from the devastating impact of the pandemic and to continue to produce their award winning Made in Northampton productions. The album is available to pre-order or pre-save on Spotify, Bandcamp, iTunes, Deezer and Tidal here.

Incidental: Music For The Stage will be available to stream on Spotify, iTunes, Deezer, Amazon from Friday 24th September, pre-save here. To pre-order a physical copy please go to here.

Rachel Portman has written over 100 scores for film, television and theatre. She was the first female composer to win an Academy Award for her original score for Emma and has received two further Academy nominations for The Cider House Rules and Chocolat, and a Primetime Emmy award for her work on Bessie.

These New Puritans are widely lauded as amongst the most original and progressive bands in the world. Beat  Pyramid was hailed by The Observer as “utterly engrossing and totally essential” and Hidden was hailed as "the  first masterpiece of the twenty-first century" (Daily Telegraph) winning NME's “Album of the Year.”

Anne Dudley was the first BBC Concert Orchestra's Composer in Association in 2001 and has won Academy, Grammy and Ivor Novello Awards. She has worked in the classical and pop genres, as a film composer,  and was one of the core members of the synthpop band Art of Noise.

2019 marks the tenth anniversary since London trio White Lies burst onto the scene with their chart-topping  debut To Lose My Life. Four albums and a decade later, the MOBO and Q Award winning band returned to the  Top 20 with their fifth album, Five. Charles Cave is their songwriter and bassist and has contributed to various other projects over the years including scoring for film and theatre, solo records, and collaborations / co-writing with other artists. White Lies are currently working on a followup to the acclaimed fifth record ‘Five’.

Valgeir Sigurðsson is an Icelandic composer and founder of the Bedroom Community label, ‘the best record  label in the whole of Iceland and maybe even the entire world’ (Drowned in Sound) and ‘a lightning rod at the  juncture where the ambition of classical music meets the aesthetics of indie music’ (Pitchfork).

Guy Chambers has written some of the world’s most popular modern pop songs, including Angels, Let Me  Entertain You, Strong, No Regrets, Millennium, Rock DJ and Feel. He’s written six albums that have topped  the UK charts and dozens of hit singles including four UK Number 1s, winning BRIT, Q and Emmy Awards.

Isobel Waller-Bridge is an award-winning composer at the forefront of a new wave of emerging artists in film,  television and theatre. Her soundtracks include Vanity Fair (Amazon), Emma (Working Title), The Split (BBC  One), Fleabag (BBC) and productions at the Donmar Warehouse, Young Vic and Royal Court.

Songwriter, composer and music producer Renell Shaw has a wealth of experience in a range of musical genres with some of the music industry's most unique and sought-after artists such as: Anne-Marie, Nile Rogers, Skepta and Orphy Robinson. 2020 was the year that Renell gained widespread recognition and won an Ivor Novello Award for his composition ‘The Windrush Suite’.

Kuljit Bhamra – A Passage to India by E.M. Forster

A leading British Indian composer, producer and internationally renowned tabla player. He was one of the key influences in the development of British bhangra and continues to be at the forefront of promoting awareness and understanding of Indian music in the UK.

James is in his ninth year as Artistic Director at Royal & Derngate, Northampton during which time the theatre’s productions have received UK Theatre, Evening Standard, The Stage and Olivier awards and the venue has regularly engaged over 20,000 people annually in its award winning creative learning activities across the region. Before Royal & Derngate, he held Associate Director roles at The New Vic Theatre, Theatre503 and The National Youth Theatre and directed work for venues including Shakespeare’s Globe, Manchester Royal Exchange, The National Theatre, Bath Theatre Royal, Hackney Empire and in the West End and off Broadway.

ROYAL & DERNGATE, NORTHAMPTON
Royal & Derngate Northampton is the main venue for arts and entertainment in Northamptonshire and one of the major producing theatres in the country, with its acclaimed Made in Northampton work touring nationally and internationally.

Four of its productions transferred to London and the West End in 2019, with The Worst Witch winning the 2020 Olivier Award for Best Family Show, whilst Our Lady of Kibeho was nominated for a 2020 Olivier Award for Outstanding Achievement in an Affiliate Theatre. Meanwhile The Season earned its composers the Stage Debut award, and the adapted screenplay from Royal & Derngate’s original play commission of The Pope was nominated for Best Adapted Screenplay at the Academy Awards as Netflix’s The Two Popes.

Royal & Derngate presents a diverse range of visiting productions on both the Derngate and Royal stages, featuring musicals, dance, comedy and music, and its two-screen cinema shows the best in world, independent, British and mainstream film. Royal & Derngate’s award-winning Get Involved programme engages with schools, families and communities in Northamptonshire and beyond, and its Generate artistic development programme supports hundreds of local artists each year.

PHANTOM LIMB
@PhantomLimbls
Phantom Limb is a music company based in Brighton, covering a range of enterprises from publishing, distribution and touring alongside its main interest of releasing original music. It was founded by longstanding industry pro James Vella (formerly of FatCat Records and Injazero Records) in 2017 and quickly grew to include ex-staff members of Thrill Jockey, Mute and MJR Touring among others.

ATLANTIC SCREEN
@AtlanticScreen
Atlantic Screen Music is a full service music production company which specialises in producing and publishing scores for film and television. Filmtrax is the In-house record label for Atlantic Screen Music. It releases over 20 film soundtracks a year from some of the world’s most talented composers such as Atticus Ross, Tyler Bates and Stephen Price as well as many upcoming score composers.