Could He Be Vulcan? The UK’s Ultimate Trekker Gary O’Brien Boldly Goes as he is Awarded The Best Job In The Universe | The Fan Carpet

Could He Be Vulcan? The UK’s Ultimate Trekker Gary O’Brien Boldly Goes as he is Awarded The Best Job In The Universe

On Friday 18th November, a temporary Starfleet Outpost popped-up at leading recruitment agency Manpower UK’s Liverpool Street based offices. Trekkers from around the country queued up to apply for a once in a light year role as Starfleet Vice-Admiral*. Earth dweller, Gary O’Brien from the Oxfordshire sector, managed to surpass 300 applicants and standout from 70 Trek-sperts from around the nation, to be named and famed ‘the ultimate Trekker.’

O’Brien bossed such intergalactic toughies as listing the full registration numbers, classes and captains of all seven ships to have bared the name Enterprise; as well as recalling the lengthy Borg name of Voyager’s Seven of Nine.

He will receive an official uniform recently used in the production of Star Trek Beyond and a VIP visit to Paramount Studio Lot in Los Angeles. 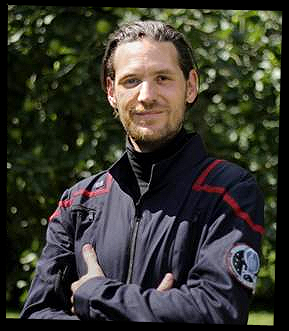 O’Brien, who has been a lifelong fan of Star Trek has said “When I was about ten years old my brother, my Dad and I would all watch it together each evening.

Obviously, it's a really feel good show, and perhaps just subliminally as a kid you pick up on the fact that the characters seem a little more like people to aspire to than you see on most other TV shows. Or maybe it's just because it has spaceships in it! Either way, the show became a great way for me to channel my creativity.

I guess I got all my knowledge of the show not just from the actual movies and episodes themselves (on constant re-watch each evening after school...), but also from all the books I read, most notably the Star Trek Encyclopedia. Sometimes I’ve wondered if there was any point to knowing this stuff, but now having won this great competition I guess I can say that there was!"

Over 300 ambitious commanders looking to make their mark on the fringes of known space registered to take part in the recruitment process and complete the ultimate Star Trek test. The test, designed by die hard Star Trek fan and renowned film journalist, James Dyer, determined if candidates had what it took to run a state-of-the-art Starbase.

Dyer who personally interviewed O’Brien has said, “This was a fiendishly difficult array of questions that tested the very limits of people’s knowledge of all things Trek. I was actually very impressed with the applicants’ performance (not to mention their costumes) but none more so than our winner. Gary absolutely annihilated the test, completely nailing even the most brutal questions without breaking a sweat. I’m beginning to suspect he might actually be Vulcan.”

Do you have what it takes to pass the ultimate Trekker test? Find the full list of questions below:

1. Some personnel questions to begin with.

Under Captain Kirk, who served as the Enterprise’s chief medical officer?

What was the name of Captain Picard’s Klingon security officer?

On Deep Space Nine, the head of security was a changeling. What was his name?

On the starship Voyager, Captain Janeway’s first officer was a former Maquis commander. What was his name?

What is the name of Kirk’s Vulcan science officer? For a bonus mark, what was the name of the Vulcan sub-commander who served under Captain Jonathan Archer?

2. During the starship Voyager’s extended mission in the Delta Quadrant, it took on a human crewmember who had previously been assimilated by The Borg. She was known as Seven of Nine. What was her full Borg designation and, for an extra mark, what was her human Name?

3. In the events depicted in the mission log Star Trek II: The Wrath of Khan (and indeed The Original Series episode Space Seed), the genetically modified human, Khan Noonien Singh is deliberately marooned on a distant planet. What was the name of that planet and, for a bonus mark, what was the name of Khan’s ship.

4. Engineer Montgomery Scott once made reference to a transporter incident and Admiral Archer’s prize beagle. He was of course referring to Jonathan Archer, captain of the first Enterprise. What was the name of said beagle? For a bonus point, what was the name of Commander Data’s pet cat?

5. Starfleet accepts cadets from many different worlds and races. Among them are the Vulcans, who are characterised by their adherence to pure logic. A Vulcan undergoes a specific ritual to purge his or herself of all emotion. By what name is this ritual known? For two possible bonus marks, what is the colour of Vulcan blood and what is the name of the event occurring every seven years in a Vulcan’s life, where they are consumed by sexual desire?

6. During his time as captain of the Enterprise. James T. Kirk was embroiled in a Klingon civil war (as depicted in the mission log Star Trek VI: The Undiscovered Country). To which penal asteroid were he and Medical Officer Leonard McCoy sentenced to hard labour? And, for a bonus mark, please name the Klingon homeworld.

7. Arguably the most important date in Earth history was when a Vulcan survey ship, the T’Plana-Hath, initiated first contact with humanity at Bozeman, Montana on Earth. On what date did this historic event take place For a bonus mark, what was the name of the human who represented Earth at this meeting.

8. In the entirely factual mission log Star Trek Beyond, Enterprise captain James T. Kirk encounters an ancient xenoarchaeological weapon created by a race known only as The Ancient Ones, which ultimately falls into the hands of a hostile lifeform named Krall. Tell me please, what was the name of this weapon? For two possible bonus point tell me the name of the planet upon which the weapon was constructed and Krall’s true name.

9. Also during that particular mission, Captain Kirk encounters an alien known as Jaylah. Having made her home in the wreckage of the USS Franklin, she became acquainted with the Franklin’s datastores, in particular its access to classical Earth music. During the course of the mission she selected two of these songs, which she colloquially referred to as “beats and shouting”. Name for me please the titles and artists of each track.

10. In 24th century Starfleet uniforms, what rank is denoted by three collar pips, two being gold and one being black with gold outline or ‘hollow’?

11. The Federation outpost designated Deep Space Nine, situated near the mouth of the Bajoran wormhole, is one of Starfleet’s most strategically important assets. It was originally a Cardassian station, what was its Cardassian designation? For a second mark, what part of the galaxy does the Bajoran wormhole lead to?

12. Starfleet has long employed a controversial no-win scenario as part of its training curriculum, the objective being to assess cadets’ discipline, character and composure in the face of insurmountable odds For a total of 3 possible marks, please tell me the following: What is the name of the test?

What is the nature of the attacking threat?
How did Captain James T. Kirk fare on the test?
He reprogrammed the simulator so he could?

14. In Starfleet’s history seven ships have had the honour of bearing the name Enterprise. List for me please their full registration numbers, their classes and their captains. One mark for each correct item.

*Honorary position only
**Link to terms and conditions;
*Merchandise for this event was provided by the following licensees:
Jumbo Games, Titan Magazines, Merchant and Pyramid International*

Film Synopsis
Director Justin Lin (Fast & Furious) delivers “a fun and thrilling adventure” (Eric Eisenberg, Cinemablend) with an incredible all-star cast including Chris Pine and Zachary Quinto, as well as newcomers to the STAR TREK universe Sofia Boutella (Kingsman: The Secret Service) and Idris Elba (Pacific Rim). In STAR TREK BEYOND, the Enterprise crew explores the furthest reaches of uncharted space, where they encounter a mysterious new enemy who puts them and everything the Federation stands for to the test.