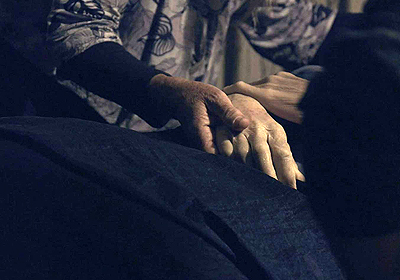 "It’s a slight film, but an intimate and passionate one about an important and inevitable subject"

Of the things that bind us, we are, as John F. Kennedy once said, all mortal. The fact that everyone is going to die is the only certainty in life and yet there still exists taboos around death, how we feel when it happens to those close to us and what happens next, if anything.

Inspired by losing three people close to her in a short period, director Rehana Rose spoke to ten funeral directors, only three of whom agreed to be featured, as she examines the ‘Progressive Death Movement’ in this thought provoking film. The ‘movement’ is a way that some funeral directors and mourners are taking back the final mourning and celebrating of a life from the broader, less personal ‘conveyer belt of death’ that funerals have become.

While it would be wrong to label all ‘mainstream’ funeral directors to be as widely impersonal as is alluded to here, the importance for the loved ones to be so intimately involved with those they have lost after the point of passing is one of the movements main goals.

Many people died during the making of this film as the blackly comic tagline tells us and we see intimate yet tasteful shots of dead bodies being prepared for the final farewell with friends and family members always involved in the process to whatever degree they desire.

This precedes funeral services tailored to an individual’s personality that tie into their own personal beliefs. Whether humanist or religious, spiritual or agnostic, each ceremony has its own unique look and feel, whatever is required.

It’s a slight film, but an intimate and passionate one about an important and inevitable subject we will all have to face in more ways than one. And the final silhouetted montage shot that sits behind the closing credits is quite possibly the most beautiful thing you’ll see on a screen all year.