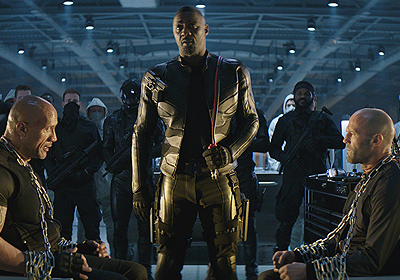 "The film offers an enjoyable comic and action addition to the franchise. This combined wth the sensory addition of the 4DX experience make for a thoroughly enjoyable cinema visit"

Here is an excerpt from our review WWE fan Charysse Tia Harper: It is not surprising that those who love World Wrestling Entertainment (WWE) would enjoy the Fast & Furious series. It has action, comedy, decent-enough acting and good-looking characters. With the introduction of the series' first spin-off, Fast & Furious Presents: Hobbs & Shaw, Pro Wrestling fans can safely chant "YES! YES! YES!" to another blockbuster headlined by The Rock (or Dwayne Johnson, for those who only know of him in the acting world)....

You know when you're getting a new film in The Fast and the Furious franchise you're in for a high adrenaline, octane driven, thrill ride, that'll keep you on the edge of your seat from beginning to end. The only way to add to this would to fully immerse yourself in the cinematic experience that is 4DX.

The 4DX experience is available in selected cinemas, giving film viewers the opportunity to be part of the film through an enhanced sensory experience. This includes a seat that moves, wind and rain simulation, flashing lights, plus scents, all generated at appropriate moments in the film marrying with action on the screen.

This immersive experience is an additional treat in the case Hobbs & Shaw elevating the enjoyment of the film to higher level. Hobbs & Shaw is not a continuation of The Fast and the Furious franchise, but a film set in the same universe, utilising two familiar characters from the franchise played by Dwayne Johnson as Luke Hobbs and Jason Statham as Deckard Shaw.

The film offers an enjoyable comic and action addition to the franchise. This combined wth the sensory addition of the 4DX experience make for a thoroughly enjoyable cinema visit.