Judas And The Black Messiah(2021) | The Fan Carpet

Judas And The Black Messiah(2021) by Federica Roberti 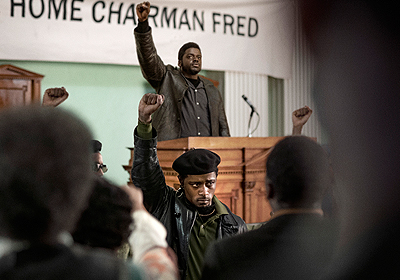 "Attempting to capture a moment in history is a difficult task, but King makes it look effortless"

2020 has been for many a year of having to face the reality of systemic racism and feeling uncomfortable. It also has been a year of small victories with the black community finally having the chance to have more representation in movie making history.

Although Hollywood still has a long way to go before it can be considered an institution with an equal voice among all the diverse communities, Judas and the Black Messiah is a fine work of art worthy of all the attention it has been receiving from multiple award ceremonies this year, including a nomination for Best Picture and original screenplay at the 93rd Academy Awards.

For everyone unfamiliar with the story of William O’Neal and Fred Hampton, Judas and the Black Messiah focuses on the events leading to the police raid and subsequent death of Fred Hampton while he was the chairman of the Illinois chapter of the Black Panther Party in 1969.

In the past, movie making as always been focused on telling the story of a hero, creating coral biographies to celebrate their role in history, Judas and the Black Messiah choses to instead tell a story about a time in history, about community and about people, and it does it by putting in the spotlight a character who could be easily recognised as a villan.

O’Neal’s story has been told before through the camera lens. However, what makes Judas and the Black Messiah a different story is the fact that director Shaka King and writer Will Berson were capable of creating a snapshot of history and its context without reducing William as the bad guy responsible for the death of Fred Hampton.

Attempting to capture a moment in history is a difficult task, but King makes it look effortless. The audience is never pushed to hate or blame O’Neal, rather it is cleverly guided in following a young man who has to face the reality of choosing his own freedom over betraying his own community. A choice forced on him by the authorities without giving him any chance to escape.

The biblical reference in the title fits the story to a T. In a tale of betrayal there are no winners, in Judas and the Black Messiah it is clear that everyone will lose something in the end: either being dignity, freedom, love or hope, each character has to live with the consequences of their actions.

Portraying on film real life people is always a difficult task. The cast ensemble chosen for Judas and the Black Messiah is nothing short of perfection; LaKeith Stanfield once again shows to the world what a talented, versatile and soulful actor he is. The way in which he immerses himself in the life of William O’Neal is outstanding. Since his first breakthrough role, there hasn’t been a performance similar to the other. The way he holds himself on screen, how he loses himself to become the characters he plays makes his performance so authentic and visceral that it is almost impossible not to feel any emotions for O’Neal.

Throughout the film Stanfield captured the essence and the motifs behind O’Neal’s choice to become an FBI informant. Not only his facial expressions but his whole body becomes part of his performance, highlighting the desperation, immaturity, arrogance, fear and impulsive desires that guided a young man to decide to sell his soul to the authorities in order to save himself.

Although it is easy to feel disappointment and rage toward Bill O’Neal, the way the story is framed makes the audience understand that each character is the product of the society they were born in.

Poverty, oppression and injustice are the forces behind every single character, however their response to it is different making it instantly clear that in this story there are no winners, only humans finding their own place in the fight against racism.

As the counter to O’Neal’s character, Daniel Kaluuya plays the charismatic, strong and passionate Fred Hampton. Kaluuya has already established himself as an incredibly versatile and talented actor. Same as Stanfield, his performance is nothing short of perfect. Looking at his portrayal of Fred Hampton it is almost impossible to separate the two of them apart. Fred’s passion, strength and commitment to the cause and the Black Panther Party are palpable in each speech that Kaluuya delivers as the late chairman. However, what makes his performance authentic is the relationship he has with the black community in Chicago and his love for Deborah Johnson, now known as Akua Njeri.

Throughout the film what the audience witnesses is a man who is ready to die if it means that the black community can be freed from the shackles of injustice perpetrated by the Police and the government. The same government that sentenced him to death to make an example out of him.

The gravitas of Kaluuya’s performance grows throughout the film and in partnership with Stanfield, the relationship between Fred and O’Neal makes the ending even more bittersweet. It maintains that opposition between two young men who grow up within the same circumstances but decided to fight two different battles.

Judas and the Black Messiah is a film that tells the truth about systemic racism. It takes a snapshot of life in the 1970s in Chicago, a city torn apart by poverty and racial segregation and by telling the story through the eyes of William O’Neal, the audience is forces to face the harsh reality of how white supremacy can infiltrate the black community and, in order to destroy its core, divide its member by preying on their weaknesses.