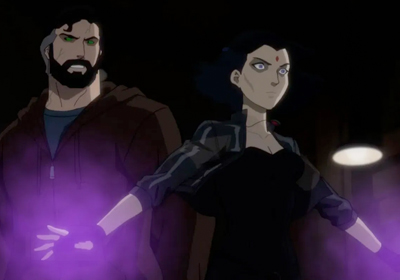 "This dystopian and bleak look at the DC Animated Universe, that has some real stakes takes full advantage of the fact that it's the final chapter"

It’s no secret that I love animation, and I have always said that adapting DC Comics to animated features seems to be more fruitful than the live action films, in my opinion this and TV are the best things that are produced by Warner Bros., which brings us to our review of Justice League Dark: Apokolips War.

The latest animated feature in the Justice League War continuity, Justice League Dark: Apokolips War is the culmination of a six year journey with the leaguers to an epic conclusion where they take the fight to Darkseid and his forces on Apokolips.

Their first excursion, lead by Superman (Jerry O'Connell) doesn’t go according to plan, as the Justice League are overwhelmed by the hybrid minions of Darkseid; Paradooms, following many deaths, the remaining members retreat to Earth.

Two years later, Earth has been conquered and Reapers are mining the core of the Earth with being a New God representative watching over the progress, but reporting to a mind controlled Batman who is now Darkseid’s herald, lead by a now depowered Superman, the remaining Justice League members unite with the Suicide Squad and the Teen Titans in a desperate attempt to put things right.

This dystopian and bleak look at the DC Animated Universe, that has some real stakes takes full advantage of the fact that it's the final chapter in a 15 film arc. that spans a six year journey, showing that this is the only way that it could have ended.

Its narrative veers into some very surprising and compelling directions, and it stick the landing, putting its live action counterparts to shame, don't get me wrong, some of the live action films are entertaining but a lot of them pale in comparison to what is accomplished here.