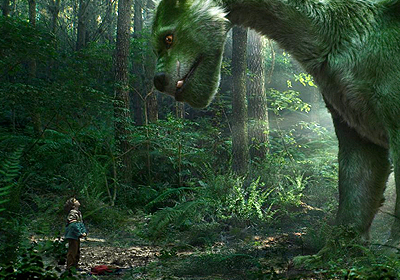 "encompasses a feeling of nostalgia for the adults, who know the original story, while recreating that magical atmosphere that only Disney can do to enrapture children's attention and entertain them"

The remake of the 1977 original family movie, Pete’s Dragon brings back on the screens the magical tale of Elliot the invisible dragon. Disney’s latest film opens with Pete, a 4 year old child, sitting in the back of his family car reading a children’s book when, all of a sudden, a dear bolts in front of the car and forces it off the road, killing Pete’s parents in the process. Terrified and in shock, with only his backpack and his book, Pete finds himself all alone deep in the forest, a dangerous place for a kid filled with ferocious animals ready to attack him. Fortunately, while running away from a pack of wolves, Pete comes across a huge, friendly and furry dragon, ready to save and protect him.

The story moves six years forward and the audience are greeted with an older Pete, running in the forest followed by Elliot, the dragon who saved him when he was all alone in the forest, the two together, while playing around in the forest, run into Grace (Bryce Dallas Howard), a ranger trying to save the endangered species of the forest from her fiancé Jack’s lumber company cutting down the trees.

Moved by curiosity, he follows her to the working site and, after observing Grace’s soon to be step-daughter, Natalie, Pete reveals himself only to immediately be taken back to town to investigate how he ended up in the forest all alone in the first place.

However, while Pete is accepted fully by Grace’s family, his friend Elliot is in danger when Gavin, Jack’s brother, discovers his existence and organises a hunting party to capture the dragon. Pete, with the help of his new found family, embarks to try to save his friend and help him find his way home.

As far as the story goes, once again Disney has brought to the screen a tale about how important it is to be accepted for who you really are and how family doesn’t always mean being related but how much you support one another. With Pete’s Dragon these values are highlighted throughout the movie at first by showcasing Pete’s strong relationship with Elliot and then by the child being accepted and taken care of by Grace, her partner Jack and his daughter Natalie.

Being a remake of a well known film made in 1977, Pete's Dragon doesn't refresh the story told in the original, but it adds that magical glow that only new technology and amazing CGI could do.

Elliot, is surprisingly realistic for a furry dragon, constantly reminding me of an oversized and winged dog who is loyal to his "pet" human to a fault, even to a point in which he is ready to risk his own safety and freedom to protect him. His face reminds me, with a touch of nostalgia, of the one of the famous cartoon dragon that our older brothers and sisters learnt to love.

Throughout the film the cast assembled do a great job in interacting with Elliot, their reactions feel natural to the audience as if a real dragon is there with them in every scene. Oakes Begley understood Pete completely, his bond with Elliot is ever present, especially when they are apart and unable to see each other. Begley interacts with the CGI dragon as if it were truly there with him, making it possible for the audience to connect and be moved by the story.

At times the plot is filled with classic clichés. The dramatic aspects almost make the movie a bit scary for children in some scenes and almost too serious for an entertaining family movie. However, the many jokes and hilarious breathers in between those moments, as well as the heroic parts in which everyone is safe and sound at the end, made it possible to balance the movie and give some comic relief to the audience.

All in all, Pete's Dragon is a family movie that encompasses a feeling of nostalgia for the adults, who know the original story, while recreating that magical atmosphere that only Disney can do to enrapture children's attention and entertain them.