Pirates of the Caribbean: Salazar’s Revenge(2017) | The Fan Carpet

Pirates of the Caribbean: Salazar’s Revenge(2017) by Ben Peter Ward 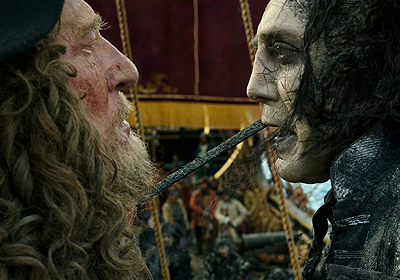 There comes a point in most franchises where you start to wonder how much longer a premise can be stretched out for, many would agree that the last Pirates of the Caribbean film was massively underwhelming and that any further instalments would have their work cut out for them.

Enter the latest instalment, tasked with potentially wrapping up the series and some of its loose ends whilst providing a compelling story for newcomers. No small task for any film I’m sure we can all agree on. The cast itself promises great things with series mainstays Johnny Depp and Geoffrey Rush reprising their roles as Captain Jack Sparrow and Captain Hector Barbossa respectively. This time around they’re joined by Javier Bardem (Skyfall) & Kaya Scodelario (Skins, The Maze Runner franchise) as well as relative unknown Brenton Thwaites who is playing the son of series favourite Will Turner (Orlando Bloom).

Story wise, as said before the last instalment left a lot to be desired and this instalment isn’t exactly Shakespeare, it is however extremely entertaining; it could be and likely will be criticised heavily for following the trope of adding zombies when all other ideas are exhausted, although more prevalent in video games admittedly. The spark of genius comes in the casting of the above mentioned Bardem who (if you’ll pardon the pun) injects life into the role of undead Pirate hating Captain Salazar, my main criticism of him however is that due to the nature of some of the effects used to bring this character to life, his dialogue seems somewhat obscured and muffled and took me out of the experience, especially considering the thick accent he has, it would’ve been clearer without any effects on his voice. Aside from this I’d have to say all of the casting was pretty much spot on; without spoiling too much, there is a superb cameo from Sir Paul McCartney and an appearance from both Keira Knightley and Orlando Bloom reprising the roles they’re best known for.

The story flows well and you honestly don’t realise the run time is just over the 2 hour mark by the end, and there’s a little something for all the family, be it the obvious and somewhat slapstick or the odd sly remark made that will have parents giggling as well,

The CGI used is another highlight, due to the nature of the plot it was always going to a be a CGI heavy affair, however it doesn't at any point feel tacked on or spectacle for the sake of it, (minor spoiler) there’s somewhat of a thrill in watching the destructive force of Salazar's ghost ship as it tears through ship after ship, and the vibrant colours and high paced plot are only extenuated by seeing the film in IMAX. Overall I would say the film is quite well balanced between comedy and action and it’s one of its big positive points.

To summarise, the film is exactly what is promised, it's a high action fun family movie that’s swashbuckling good fun, sure it may not be the most sophisticated plot of any of the Pirates films, but it’s nowhere near as convoluted or clunky as the last one and that makes it the superior film in my humble opinion, and there is no gimmicky use of 3D which was a big failing of its predecessor. I give this a 3.5 out of 5 and it only narrowly misses being higher for the reasons mentioned above.

It's a Pirates life..