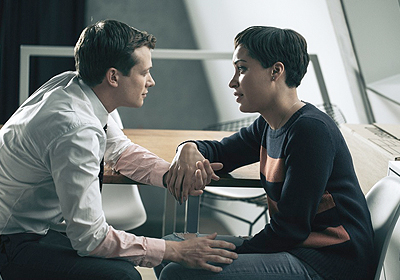 "a film that brings to the screen a fairly complicated novel and, even thought the main actor carries the entire weight of the movie on his shoulders, the directing gets lost in the confused and disoriented state"

An adaptation of Tom McCarthy's book, Remainder is a movie that reflects on the human need for connection through the disconnected story of a man who is desperately trying to recover his memories after an accident.

After being struck by a falling object and having to go through rehabilitation, Tom lost all the memories of his past. Owning a huge amount of money, won with his settlement against the company that owns the building from which the object fell, doesn't help him at all in his difficult road to find himself.

In his desperate thirst to recover his past and discover who he is again, the protagonist embarks on a dangerous and obsessive journey to retrace his existence by trying to recreate his past with the few glimpses of memories he has left.

In this movie the main aspect is the complete and total absence of clarity from the first scene until the last one. The audience doesn't know the name of the protagonist right away and they are instantly thrown in the middle of the action.

Since the story is told using the first person narrative, with the use of voice over at the beginning and in the end, the feeling of confusion and disorientation is ever present throughout the movie. What the protagonist is feeling is portrayed by using different filming techniques. By using close ups on his face and by blurring all the edges of the frame, the complete loss of the self and the disorientation is strongly highlighted. Even the editing process makes Tom's memory loss a living and breathing character. In fact, the sharp cuts between one scene and the other disrupt the regular flow of the story, making it difficult for the audience to make out if what is happening is real or just Tom's fragmented memories. The flow of the movie doesn't follow a straight timeline, underlining the character's frustration and lack of personality since he doesn't remember anything of his past because of the trauma he suffered.

Whilst it is essential for the plot that the audience feel what the main character is feeling, unfortunately, the movie becomes really difficult to follow, because of the continuous jumps from one scene to the next and the discontinuity in almost every scene.

Another brilliant aspect of the film is the stagecraft of the main actor; Tom Sturridge, he brought to the screen a soulful performance of this broken man desperately trying to find a connection to his past and with the rest of the world. His frustration, the desperation to learn who he was and is and his need to find himself again, are portrayed clearly in every scene. Even during the most disturbing moments, he is capable of creating a balance between his character's determination to recover his memories and his extreme coldness in seeing his task completed no matter the cost.

However, what gets partially lost in the movie's development is the message behind the story. Hidden behind Tom's confusion and his obsessive need to discover his past, there is a relevant lesson that modern society still needs to learn: How dangerous it can be to delve into the past and get disconnected from the reality around us.

The protagonist embarks on this obsessive quest to find himself because that is the only way for him to find a connection in this world. Not knowing his past leaves him isolated from everything, which is something that in our modern society is almost unacceptable.

In order to find himself, Tom is prepared to do everything, even something dangerous and risky. His desperate need to discover his past by physically recreating the glimpses that he has thanks to different triggers, causes a chain of events that brings the movie to end in a full circle with the final scene matching the first one. Unfortunately, the erratic way in which the film is carried out almost loses this important moral lesson through the cracks of the story.

All in all, Remainder is a film that brings to the screen a fairly complicated novel and, even thought the main actor carries the entire weight of the movie on his shoulders, the directing gets lost in the confused and disoriented state of the main character and in doing so it mislay the importance of the message hidden behind the story.