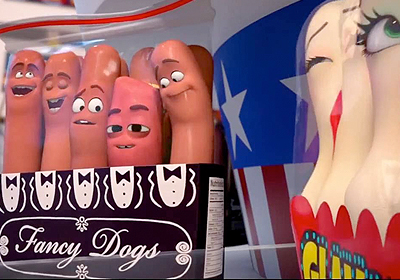 Frank (Seth Rogen, who also writes and directs) is a sausage living in the joyous world of Shopwell’s Grocery Store where all the food rejoice in the hope that the Gods (humans) will choose them and they will be taken out of the store to the promised land. However, all is not as it seems, at least from the foods perspective, and the Gods are not the benevolent caregivers they have been taught to believe in, but in fact the horrifying, monstrous reality is people eat food.

As a human, or I assume a very close approximation, you and I both know the ‘truth” that the food is hiding from and though it’s played out as a big reveal the movie doesn’t dwell on it too much so we aren’t really expected to be surprised. As it happens the trailers and advertising actually haven’t given too much of the main plot away so I won’t spoil any more here, suffice to say Frank finds himself confronted by the “truth” and battles to save his fellow foodstuffs from the wrath of the Gods as it were.

It feels like a Pixar parody like this is long overdue, the Toy Story trilogy being a clear influence here, and in that regard Sausage Party really nails its target, pushing the absurdity of “what if blank was secretly alive” to this horrifying extreme and if you thought the technicalities of the Toy Story universe didn’t quite make sense then be prepared to have it turned up to eleven.

Personally I’m not of the opinion that something is funny just because it’s gross and there’s a little too much of this for my taste. In fact, that’s the big problem here for me. Whilst it’s fun as an adult to laugh at an implied sex joke snuck into a kid’s film, here all the subtlety is torn out and thrown into a big fire, which kind of misses the point of those sorts of jokes in the first place.

So the film is crass but you can get that from the title and if the concept alone has you giggling you won’t be disappointed. There’s a lot of running gags that strike perfectly and as the film jumps from one extreme to another you can’t help but laugh at the ludicrousness of it, though despite a very meta narrative the ending does come a little out of nowhere.

There’s also a not so subtle social commentary on politics and religion that is the kind of thing the makers of South Park can do in their sleep but only exists in broad strokes here. It’s clever but not as clever as it maybe needed to be and doesn’t really have anything new to say on any particular subject. It probably should have been left more to background noise than a serious plot point, though it works well enough to hold the story together and the running gag of the food taking on the stereotypes of the culture it represents is perhaps worth the predictability.

It really feels like this should be a love it or hate it film, however, I fell sort of in the middle. If I’m being honest Sausage Party didn’t entirely work for me, too reliant on sex jokes and a total lack of emotional depth despite it obviously trying to achieve some. It’s hard to sympathise with the food especially as much of it was already alive at some point in animal form and we didn’t have a problem with killing that so what’s the big deal now? Ultimately it’s not as clever, emotional or I’m afraid funny as the films it’s spoofing, which leaves it feeling a little pointless, and if you’re hoping for the comedy of the year this probably isn’t it (it’s not as good as previous Seth Rogen project This Is The End), but for surreal gross out comedy you’ll get exactly what you expect and plenty of it.