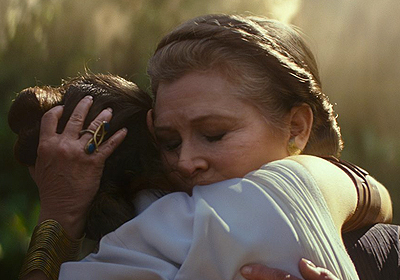 The final instalment of the epic Star Wars Saga has divided audiences, much like its predecessor, and whilst I can acknowledge there is one part in particular of The Rise Of Skywalker that I could've done without, it doesn't change the fact that I thoroughly enjoyed and appreciated what Star Wars: Episode IX: The Rise of Skywalker had to offer.

I'm going to avoid major spoilers (unlike some people on the internet), I will lightly touch on the plot and story beats but I won't discuss the ending or anything like that, so we pick up with the opening crawl that reveals that Emperor Palpatine (Ian McDiarmid) has returned, leading to an opening scene of Kylo Ren (Adam Driver) cleaning house by dispatching Sith loyalists as he marches into the caverns of Exogol (the hidden Sith homeworld) and is confronted with truths from the resurrected Emperor, how he has returned is a mystery, however, he does utter his line from Revenge of the Sith that alludes to unnatural abilities.

From here there are many revelations as Rey (Daisy Ridley), Finn (John Boyega), Poe (Oscar Isaac), Chewie (Joonas Suotamo), BB8 and C3P0 (Anthony Daniels) embark on a perilous quest to find the Sith Way Finder that will show them the way to Exogol; a quest that was started by Master Luke Skywalker (Mark Hamill) and General Lando Calrissian (Billy Dee Williams).

In true Star Wars fashion, the worlds created are beautifully realised, and truly pop in the IMAX format, immersing you in the adventure, the 3D is there but it isn't distracting; which for a film like Star Wars: Episode IX: The Rise of Skywalker is great because there is a lot of information to absorb. The film doesn't feel bloated in any way, you feel the stakes and whilst some burning questions are answered, new questions take their place, which I think is the point of Star Wars; leave the audience wanting more - and undoubtedly with a few questions left unanswered, I wouldn't be surprised if these are explored in other media, including Disney+.

Daisy Ridley shines in the role of Rey, as she comes to terms with her place in the universe and it is ultimately her choices that define her and not where she comes from. Similarly, the handling of Leia was a fitting tribute to the dearly departed Carrie Fisher, J.J Abrams and his Creative Team were in a very tough position with her untimely passing, but it was handled with grace and I think Carrie would be proud of what they ultimately did, however there is one very quick moment that could've been more polished or they should've had Billie Lourd in the role for that few seconds or just don't open the helmet.

I can't talk about Star Wars without giving kudos to John Williams for giving us another amazing score, Williams has been with the franchise since the 70's, and hearing the fan favourite score from him is fitting, and if this is truly the last Star Wars that he scores, his legacy will live on, he's one of the best and truly knows the franchise, it wouldn't have felt right if it wasn't him scoring the final film in the Skywalker Saga.

There are a fair amount of surprises and cameos peppered in throughout the film, with natural (or unnatural) evolutions of Force and Sith Powers that make a lot of sense, one of which I won't go into here as it is a major spoiler for the conclusion of the film.

All in all, Star Wars: Episode IX: The Rise of Skywalker is an incredible and fitting film to cap off a franchise that has spanned four decades, it had the task of realigning the direction of a story after several controversial deviations in The Last Jedi whilst creating a fully formed film that will sit comfortably at the top of many Star Wars lists, and will undoubtedly be the source of many debates in the years to come.