The Big Bad Fox And Other Tales(2018) by Phil Slatter 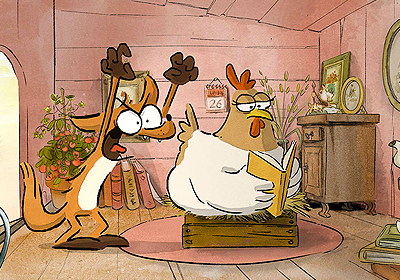 "despite minor misgiving, this is a film with a warm heart and warm characters, underpinned by the likeable voice cast who hit all the right comic notes"

In these days of smart CGI animation pushing the boundaries of what is possible in the medium, it’s somewhat refreshing to come across a more traditional approach in the guise of this French comedy, animated in a water-colour pastel style.

Framed around an all-animal theatre group, the film’s postmodern approach brings us three separate stories presented as plays and told with the same characters on Honeysuckle farm.

It opens with Baby Delivery which seems to take a similar inspiration as the Pixar short Partly Cloudy. A stork crashes on the farm en route to delivering a baby to her parents. From here we meet a hapless bunch of heroes – prim and proper Pig (Justin Edwards), laid back duck (Bill Bailey) and tag along Rabbit (Adrian Edmonson). This well-meaning but bumbling group take it upon themselves to complete the delivery and of course things don’t go particularly smoothly.

The second story is the titular The Big Bad Fox, which tells the tale of a fox (Giles New) who is anything but big and bad. None of the animals on the farm are scared of him and when he inadvertently steals three baby chicks, he comes to raise them as his own.

Finally, we have Saving Christmas which brings back the aforementioned Pig, Duck and Rabbit when think they have killed Santa. As with the first story, they set about to put things right by taking on the role of Saint Nick and once again, things don’t go to plan.

As well as the traditional animation (which is beautiful to look at), the stories also feel familiar with likeable talking animals playing out recognisable, if not entirely unoriginal tales. It’s nothing that you may not have come across in children’s story books, but then that may not be a bad thing. This approach to storytelling may be tried and tested, but it’s also comforting and loved.

The stories do get stretched somewhat despite their short nature and the loose way in which they tie together suggest that it may have been better to a TV series which could have expanded to more adventures. That would be welcome, for despite minor misgiving, this is a film with a warm heart and warm characters, underpinned by the likeable voice cast who hit all the right comic notes.