The Drover’s Wife: The Legend Of Molly Johnson(2022) | The Fan Carpet

The Drover’s Wife: The Legend Of Molly Johnson(2022) by Phil Slatter 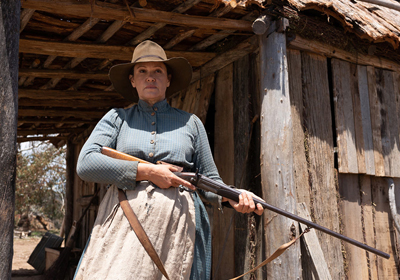 "With twists and revelations that paint all characters in ever-changing lights, Purcell has created a fascinating film that never grandstands or preaches but allows its themes to simmer through the narrative"

Set in the Australian outback in 1893, The Drover’s Wife is a cinematic telling of director and star Leah Purcell’s own play which puts a feminist spin on the western, a traditionally male dominated genre.

The Alpine country of the Snowy mountains might have a similar look to the more fantasised world of the American Wild West, but under the gaze of cinematographer Mark Wareham’s camera it looks in equal measures harsh, dangerous and stunning a fitting landscape, in which it is hard to be even born into, never mind survive in.

Purcell stars as the titular Johnson, the heavily pregnant wife of a sheep drover and mother of four. The law arrives in the guise of well-meaning British police officer Nate Clintoff (Sam Reid) and his wife Louisa (Jessica de Gouw). When Molly’s husband is reported missing and a fugitive Aboriginal man (Rob Collins) stumbles on Molly’s property a series of events commences which puts Molly and her family in danger from all sides.

With twists and revelations that paint all characters in ever-changing lights, Purcell has created a fascinating film that never grandstands or preaches but allows its themes to simmer through the narrative. The racism towards the indigenous population creates a threat to the Johnson clan from the foreigners, although Purcell is far too skilled an artist to simply have characters making broad racial slurs instead adding enough nuance and backstory to some of the villains of the piece before a domestic abuse undertone rises to the surface, demonstrating an internal threat to the Johnson clan.

At the centre of it all is the irrepressible Molly – part victim, part vigilante and complete feminist icon – caring the ones she loves and providing the protection that is so required in such a harsh environment. Purcell, the writer and actor, has taken a character that didn’t even have a name in the original short story and created a western hero for the ages.

Underpinned by Salliana Seven Campbell’s magnificent score and superbly edited by Dany Cooper, the film contains some superb time-lapse footage in a metaphor of how the stories of the many Molly Johnson’s of history need to now reverberate throughout the ages to the present day. Whilst the arrival of a forward thinking movement at the film’s climax is too late for Molly, as with all westerns it remains relevant to modern day and the struggles here within must continue to be fought 130 years later.