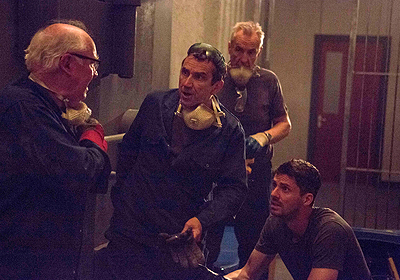 The nation was captivated by the robbery of the Hatton Garden Safety Deposit in April 2015, with an estimated £200 million worth of goods stolen in what was one of the largest robberies in English legal history. The eventual arrest of the men responsible, and the revelation that they were all elderly former thieves, only added to the layers of the intrigue and mystery already surrounding the job, with the story sounding like perfect fodder for a heist film.

That film is The Hatton Garden Job, a light-hearted romp that tells the story of this motley band of rogues and their quest to pull off the biggest robbery in British history, creating a decent if highly unoriginal crime caper.

An unnamed London thief is recently released from prison, thanks to some help from some Hungarian gangsters. In return for their assistance, the thief is ordered to rob the Hatton Garden Safety Deposit and steal the pricey contents hidden within its vault. To pull off this seemingly impossible job, the thief recruits a team of elderly former thieves, eager to pull off one last big job before finally retiring from their criminal lives.

Matthew Goode is our unnamed guide into this world of crooks and thieves, narrating proceedings and offering insider information about the life of a professional thief. Goode makes for a charming and likeable protagonist, but his performance his somewhat undermined by its glaring similarities to Daniel Craig’s similarly unnamed protagonist in Layer Cake, with it featuring similar dialogue about the criminal underworld and the dealings within.

The real stars of the film are our elderly band of thieves portrayed by a veritable who’s who of British character actors, including British soap opera favourites Larry Lamb and Phil Daniels alongside with David Calder and Clive Russell. All provide fine performances filled with humour and pathos about the ageing process with the heist serving as a kind of “last hurrah” for the ageing crooks, with their charm being so overpowering to the point that you’ll find yourself hoping they get away with the loot at the end.

On slightly less fine form is Stephen Moyer and Joely Richardson as a pair of rival crime bosses, with the characters feeling largely unnecessary to the overall plot, with them really only there to add some minor drama to Goode’s characters motivations for pulling the job. They don’t necessarily give bad performances, it’s just that they feel like pointless additions to what is already a fascinating story.

The story and the manner in which it is told is hardly original, with it featuring the usual appearances of loveable “geezers” and “crafty cockneys”, with the story told in a flashy, quickly cut together fashion that almost every British crime film has done since the release Guy Ritchie’s Lock Stock and Two Smoking Barrels nearly 20 years ago. It’s not necessarily a bad way of telling a story like this and indeed it works to the film’s advantage, introducing the characters and telling the story in a fast-paced and energetic style. It’s just not a very original way of telling a story like this.

The story also has many unnecessary moments of drama and on too many needless plot threads. These are painfully obvious in the subplots involving the previously crime bosses or in the scene in which the crew abandon the titular job halfway through. These moments do hurt the film somewhat, with it all feeling like incredibly forced and very much like the film is trying to pad out its runtime to reach 90 minutes. The film would have been far stronger without these moments, and would have worked better had it a light-hearted caper solely focused to the antics of the robbers, even if it resulted in a much shorter film.

While it’s hardly going to be as iconic as something like The Italian Job, The Hatton Garden Job is still an enjoyable caper - it’s style and approach of the story are hardly original, and it is burdened by pointless subplots, and general padding, the endearing lead performances of the elderly gang of thieves and the overall charm of the film save it from being a boring by the numbers crime drama.