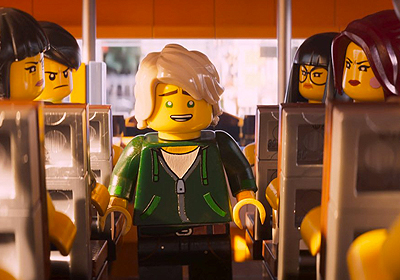 "bombastic and colourful, reminding me somewhat of a LEGO version of the Power Rangers"

Inspired by the popular toy line and the long running animated television series, The LEGO Ninjago Movie is the third entry into the LEGO Cinematic Universe, and it’s a lot of fun, capturing the joy audiences felt with its predecessors The LEGO Movie and The LEGO Batman Movie.

We follow Lloyd Garmadon (Dave Franco), who is not well liked at school, he is bullied and as the Green Ninja, he struggles with the notion of doing battle with his father Lord Garmadon (Justin Theroux) to keep his town of Ninjago safe and the feeling of longing since he has never known his father outside of battle.

From the outset, The LEGO Ninjago Movie is bombastic and colourful, reminding me somewhat of a LEGO version of the Power Rangers, which is by no means a bad thing; the six Ninja have their own colours and elemental powers - Cole the Black Ninja of Earth, Jay the Blue Ninja of Lightning, Kai the Red Ninja of Fire, Nya the Silver Ninja of Water, Zane the White Ninja of Ice and the aforementioned Lloyd the Green Ninja, leader of the Secret Ninja Force, the six heroes pilot battle mechs with Lloyd’s being a Dragon.

The voice cast is superb, making up the six Ninja we have Fred Armisen (Cole), Kumail Nanjiani (Jay), Michael Peña (Kai), Abbi Jacobson (Nya), Zach Woods (Zane) and the aforementioned Dave Franco as Lloyd with Jackie Chan as Master Wu, the Uncle of Lloyd and teacher of the Ninja and the ever wonderful Justin Theroux as the villainous Lord Garmadon.

The story sees our heroes travel into the wilderness to find the pieces inside themselves to save Ninjago and possibly reunite father and son.

The LEGO Ninjago Movie has a lot of heart and is a lot of fun from start to finish, my one gripe with the film is that unlike the other entries in the LEGO Cinematic Universe it doesn’t use LEGO substitutes for the elements, instead it uses real fire, ice and water when used in the story.

Bookended by Jackie Chan’s Mr. Liu, the owner of a shop that reminded be of the shop in Gremlins, he’s clearly still got it, and always a joy to see and hear on screen.

All in all, The LEGO Ninjago Movie is not a bad film, it’s funny and witty, has a lot of heart and an engaging story, that is rather a simple one of belonging and finding your place, it doesn’t let the side down at all, I would say that it is a very close second to The LEGO Batman Movie however, I would have liked it more if it was a completely LEGO environment and didn’t have real elements that took me out of the movie somewhat.