The Story Of Film: A New Generation(2021) by Phil Slatter 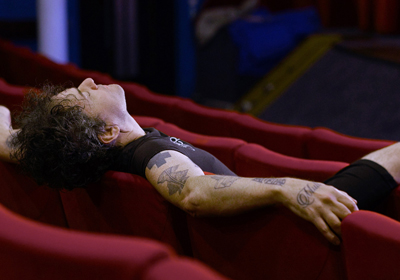 Mark Cousins 2011 documentary series The Story Of Film: An Odyssey was in equal measure a fascinating history of the moving image and a love letter to cinema; a rich, passionate necessity for anyone who is even remotely interested in the subject matter.

Cousins has continued to explore related subject matter most notably in The Story of Children and Film and The Story of Looking and now he returns to his magnum opus with The Story of Film: A New Generation.

Far from being an afterthought or add-on, this is another extensive and worthy chapter in the odyssey. Over the past ten years, film has continued to develop at an alarming rate most notably in the way in which it is consumed and has become a further reflection of society.

Split into two chapters over its extensive but never strained 2 hours and 40 minute running time, we open with a cross cut of two of the most talked about films in recent years as Joaquin Pheonix dances down steps in the Bronx in Joker and Elsa (Idina Menzel) belts out Let It Go in Frozen. Films seemingly from the opposite end of the cinematic spectrum but none the less speaking the language of film, and this takes us into Chapter One – Extending that said language.

Cousins examines how conventions have been pushed around the world with the rules being extended. Thematically traditional and outdated stereotypes have been shaken and challenged how we perceive people. He equally acknowledges that recent technological advances have had the biggest influence on how we view the world since the very invention of film. There’s also the effect on the way that film has been made – we can view films via streaming services on our phones but then the likes of Tangerine can be made using those self-same devices.

Chapter Two asks the question ‘What have we been digging for?’ and looks into the very soul of cinema, the way it reflects society and how the rules have now been broken.

Cousins is not cynical in his narration when he discusses streaming services and the power shift that has come with it, nor is he critical of influences such as Artificial Reality. In fact, key to the entire documentary working is a distinctive lack of prejudice. His rich, charismatic voiceover gives equal billing to big budget marvel films as he does to experimental European dramas that even the most hardened of cine-philes may struggle to recognize.

This is all about film and cinema in its purest form – the moving image and the way it reflects and examines the human condition, bringing us right up to date with its role in the global pandemic.

Much like with Odyssey there is a great deal to ponder, much to learn and many more films and film movements to explore whilst we look forward to the next ten years of film, and then, hopefully, Cousins returning to this format with The Next Generation.

We can but hope.