We Are the Geordies(2020) by Phil Slatter 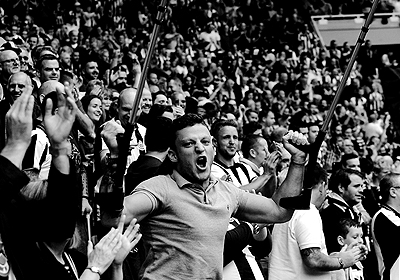 "ultimately a film by fans, of the fans and perhaps best suited for fans"

The relationship between football and cinema has hardly been a harmonious one over the years, with the unpredictable nature of the beautiful game often juxtaposing the more formulaic structure of narrative sporting drama.

The documentary format has the ability to remove that issue though with Mike Brett and Steve Jamison’s Next Goal Wins making such an impression as to awaken the senses of Taika Waititi who is directing a fictionalised version of the story. Equally the Netflix documentary series Sunderland Til’ I Die proved to be a hit with audiences and in a similar vein comes James DeMarco’s We Are The Geordies.

DeMarco’s film takes a similar approach to series one of the aforementioned show, focusing on a north eastern football team in their attempts to get promoted back into the Premier League following relegation the previous season.

The team in question is Sunderland’s bitter rivals Newcastle United and the season is 2016-17 when Rafa Benitez, viewed here as something of a messiah through the eyes of the faithful, opted to stay with the Toon Army in an attempt to restore them to the top flight.

Although Newcastle legends Alan Shearer and Malcolm McDonald appear briefly in talking heads, the focus here is very much on the supporters, to the point where the narrative of the matches are often portrayed via lingering shots of stadia and close ups of spectators living the drama with the actual football footage used sparingly.

In between those moments we get to know a variety of said fans and the diverse range of the individuals featured is one of the documentaries strong points. From a fan so young he’s not even born when the season commences to one whom attends matches with his grown up son, there are men and women of varying ages, backgrounds and heritage, all coming together in a shared love of a sports team. In these divisive times, it’s an important reminder of how sport has an ability to unite.

They themselves often speak with passion and charisma, but unfortunately it’s hard for them not to tread common ground. Like fans of all clubs, they speak of how their club is more special than others, how it’s a big part of their life, how they can be a metaphorical twelfth man, how the hope of better days can be the worst thing and how it would be typical of their side to snatch defeat from the jaws of victory. It’s hard to argue with their inward perspective, but outsiders may see such comments as cliches.

It’s also the case that Newcastle’s 2016-17 campaign was relatively trouble free, although the film makes a decent attempt at wringing drama from the run-in and final day showdown.

A final coda does nod to the clubs ownership issues, but this is but a passing mention for We Are The Geordies is ultimately a film by fans, of the fans and perhaps best suited for fans.