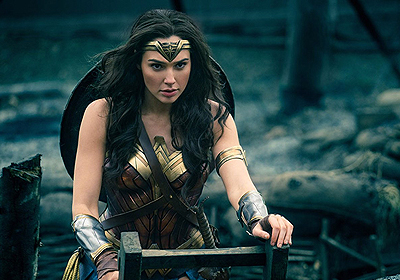 "the entry into the DCEU that we have been waiting for, and with a film as strong as Wonder Woman it gives me hope for the future of the DCEU"

So as we venture into the Summer season of films, we come to first DC Entertainment release in the form of Wonder Woman, brought to the big screen by acclaimed filmmaker Patty Jenkins, who hasn’t delivered a film in over a decade, some have called her a gamble, I strongly disagree.

Bookended by Wonder Woman aka Diana Prince (Gal Gadot) in present day, Wonder Woman is essentially an origin story, showing us Diana (played by Lilly Aspell and then Emily Carey) as a young Amazonian Princess on Themyscira, who longs to be a Warrior like the other Amazonians.

Trained by her Aunt Antiope (Robin Wright) in secret, until her mother; Hippolyta (Connie Nielsen) catches them and reluctantly agrees to let her daughter be trained, until the hidden island is inadvertently discovered by Steve Trevor (Chris Pine) who is trying to escape German forces.

The first third of the film is essentially a fish out of water story, as Steve Trevor gets to know the hidden paradise that is Themyscira, as he reveals (with the help of the Lasso of Truth) that there is a Great War raging in the outside world.

Determined to help, Diana (Gadot) leaves Themyscira with Steve in order to stop Ares (the God of War) who she believes is the Puppet Master behind the conflict, the film then becomes a fish out of water story from Diana’s perspective as she learns the ways of mans world.

This film is beautiful to look at with rich colours, both in the settings and the costuming, bright and vibrant which is a stark contrast to the recent offerings from the DCEU.

Jenkins has crafted a film that admittedly had a lot riding on it; it had a lot to live up to following the less than stellar reception of Suicide Squad and Batman V Superman: Dawn of Justice, but Jenkins has masterfully brought Wonder Woman to the big screen. Obviously, the film wouldn’t work without the breathtaking performance from Gal Gadot as the titular heroine, and she is just wonderful in this role, giving heart and depth to the character, embodying her wholly striking a fantastic balance of strength and naivety, giving us a well rounded character that we only had a glimpse of in the aforementioned Batman V Superman: Dawn of Justice.

The CGI used is also a plus, and the music used throughout the film is just stunning, and I’m not just talking about the now iconic theme used in the Trailers; the music composed by Rupert Gregson-Williams is incredible and strengthens an already solid film.

All in all Wonder Woman is the entry into the DCEU that we have been waiting for, and with a film as strong as Wonder Woman it gives me hope for the future of the DCEU. There is also a nice touch with a thank you to Lynda Carter, who brought the character to the small screen in the 70's showing us just how far female lead superhero outings have come, I bring this up because acknowledging the past will build a better future. This is a wonderful step in the right direction for the DCEU, so Warner Bros. look at this and let the filmmakers you hire make the film they envision and not something that's been made by comity.