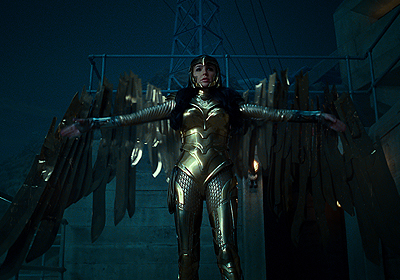 To say I was excited to see this film would be a huge understatement. Not just that I hardly remember the last time I was in the cinema (thanks 2020), I also LOVE the original Wonder Woman from 2017, which finally gave us a great DC film, introduced us to Gal Gadot's Diana and wowed us thanks to Patty Jenkins' impeccable directing.

My expectations were high to put it mildly, possibly too high for anyone to reach, as I can't help but feel slightly let down by the sequel to a film I'd describe as “feel good”, despite being set in World War I. You'd think a film set in 1984 would have to be even more fun with all the ridiculous clothes, the screaming colours and nostalgia associated with the time.

Wonder Woman 1984 opens with a bash. Fun, vibrant, full of women. We're back in Themyscira, with its lush landscape and amazing Amazons. I won't be spoiling anything in this review so let me just say the first 10 minutes were a fun roller coaster ride, while also setting up the theme of the overall story. “Now this is podracing” (to quote another franchise) flashed through my mind throughout this thrilling sequence, which brings back some beloved characters. My heart leapt with joy. I was home.

Jump to Washington D.C. 1984, where we find Diana fighting crime and somehow managing to not get identified as more than the mystery woman on the news, all while working as a scientist at the Smithsonian. It is here we're introduced to Kristen Wiig's Barbara Minerva, the always overlooked, clutzy yet adorable counterpart to Gal Gadot's impeccable, cool and dignified Diana Prince. It doesn't take long for the two women to hit it off and it is this relationship and these two characters in particular I would have loved the film to focus on more.

Cue the appearance of the big bad, Maxwell Lord, played by Pedro Pascal, in his most squirmy, sweaty, puffy-looking role I've ever seen him play. Just seeing the character made me highly uncomfortable and borderline anxious every single time. I truly hated every second he was on screen. Without going into too much detail, his character and arc boils down to being a man doing a lot of bad things, who has to be saved and changed into a better being by yet another woman. This is the same old, tiring story we get all the time. Where is the story I thought we were going to get, with Diana vs Barbara?

Lord is a by the numbers villain, nothing engaging about him. They even had to give him a son to make him the tiniest bit likeable. On the other hand we have Barbara, who from the first second she's on screen is immediately captivating. She is more a victim of the story and it was great to see her character develop throughout. Given where her and Diana started out, their changing dynamic would have made for a far more interesting and engaging story. How amazing is it when you equally care about the hero AND the villain? I could not have cared less for Maxwell Lord and that ultimately made him a weak, uninteresting villain and I am usually all for the villain. I also couldn't help but notice that too much focus was given to Lord in what is supposed to be Wonder Woman's film. Diana chasing down Lord felt like Gadot chasing Pascal for screen time.

Surprisingly it was Chris Pine returning as Steve Trevor that brought some fun back into the film. The entire fish out of water scenario we found Diana in in the first film is now swapped with Steve being out of his depth in 1984. While that is fun, Pine can't hold a candle to Gadot's adorable naivete and excitement from the 2017 film. There are further implications with the technicalities of how exactly Steve is brought back that I don't want to go into great detail here other than say “consent”. I also had a hard time believing a woman would not have moved on from her former lover after 70 years. Come on!

Technically Wonder Woman 1984 looks great and it was thrilling to watch it on an IMAX screen. Due to Covid restrictions our seats were allocated and I was sitting too close to the screen for my comfort, which I blame for my slightly blurry experience of the action scenes. Where I vividly remember the detailed action from the original I couldn't help but be somewhat confused as to what exactly was going on here at times.

Overall I enjoyed Wonder Woman 1984, but it left a slightly unpleasant taste, which probably has more to do with its end of the world scenario and us currently living through 2020 than any of its performances or directing. Gadot is a pleasure as always and I can't get enough of Diana as Diana Prince or Wonder Woman. Wiig's Barbara is a great character that I would have loved to have seen a lot more of, with or without powers. I really wish Pascal's Lord would have had a magnificently tinier role and I hope this is the last we see of Steve Trevor. Let the woman finally move on.

Wonder Woman 1984 was not the film I expected, but it certainly feels like the right one to end 2020 with. Thank you Patty Jenkins for giving us more Amazon action. And Diana. Diana as Diana. Diana as Wonder Woman. Just more Diana. And for everyone on this planet getting the message at the end. Please and thank you.