Sadie Stanley is a teen actress from Columbia, South Carolina. At the age of 12/13 she really decided she wanted to be an actress after being in several school and community theatre productions from the young age of 5/6. Her parents didn’t take her seriously at first. After non stop nagging, and continuous asking her parents finally believed she was for real about wanting to pursue this. She went to the open call at John Casablancas in Charlotte, North Carolina, and after being accepted quickly went through their program and graduated.

Being in John Casablancas she was able to audition for an Expo being held in Dallas, Texas and after she was accepted her parents let her go. After 5 long, tiresome, and exciting days she met her current manager Taylor Bright of StageCoach Entertainment. Not long after signing with Taylor she was able to fly up to LA for part of pilot season with her mom for what was supposed to be a stay of 3 weeks. Her first auditions she had while in LA were a self tape that she booked (Giggling Girl #1 on Game Shakers,) and an in person audition for the Disney Live Action Remake of Kim Possible (Kim Possible.)

After the first 3 weeks she was thriving, having earned several callbacks and much more. They then increased their stay 2 more weeks and continued to do that for a total of 9 weeks, jumping from Airbnb’s, hotels, and apartments to keep their cost low due to the fact her mother had to quit her job after they decided to stay in LA longer than 3 weeks. After the first 3 weeks, shortly into the 4th is when she received the call that she had gotten a callback for Kim Possible. After about 7 or 8 auditions she learned she booked the role. She filmed the movie the summer of 2018 in Canada and the film will come out sometime in 2019. While she was in Los Angeles, her father and 3 siblings were rooting for her back in South Carolina. She has a twin sister and 2 older brothers. 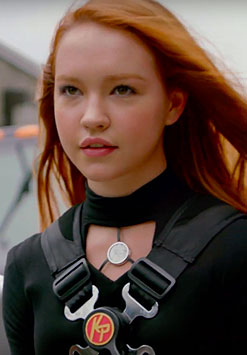