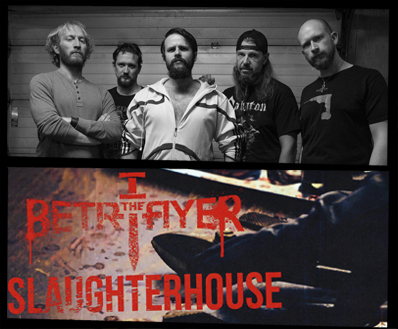 October 31, 2022 | I the Betrayer is made up of five guys from altogether different musical backgrounds brought together by their love of metal, and random chance, to create music which encompasses every part of their collective vision.

Influenced by all kinds of styles, from blues and progressive rock to death metal, they have managed to carve their own identity within the genre. Among the heavy metal chugging and pounding drums, you can expect to hear soaring vocal melodies leading to guttural lows, progressive inspired leads on top of driving metal progressions and contemplative clean passages exploding into a forceful and commanding song. Their first release was an EP named “7”, which is now available on most music streaming platforms. They have since also released a cover of Avenged Sevenfold’s “Shepherd of Fire”, their latest single and first music video “Guise of The Infectious”, and are now working on releasing a new album for 2022.

Alongside the release of “Slaughterhouse”, and with the exciting launch of The Fan Carpet: Arena, Tom sat down with bassist Kyle Sevenoaks and asked him to talk about his top five horror flicks! Enjoy!

Kyle Sevenoaks – This is a recent horror that I could not stop watching, an insane premise and great direction, it’s stuck in my mind as an especially great recent movie.

KS – Not the remake, no thanks. When I was a teenager, a friend rented this from the video store not knowing at all what he was getting us into. He was not a fan of horror at all, but thought he’d step outside his comfort zone knowing I enjoyed it. He did not enjoy it. I enjoyed watching him squirm and feel queasy as the film went on. While not universally loved, I enjoy this movie a ton.

KS – As a massive fan of sci-fi as well as horror, mixing the two genres on paper is a recipe for success with me. This one is a movie I watch at least once a year, with the lights on. Its take on the fear of the unknown, of what would drive people to do such things to themselves and others is what’s stuck with me since I first saw it.

KS – Another sci-fi horror I was introduced to as a teen, I love the slow burn pacing of it, the seemingly unstoppable alien that doesn’t move with any urgency at all and of course an appearance from the great Sir Patrick Stewart makes for a great time.

KS – Blending humour and horror together is never easy, but I feel this one hit the mark for me perfectly. Always enjoyed this one along with its incredible soundtrack. An incredibly unique movie.