The Fan Carpet‘s Corinna Jane welcomes you to The Fan Carpet: Arena with our inaugral interview to talk EXCLUSIVELY to Gill Montgomery, one of the members of THE HOT DAMN! following the release of their wonderfully quirky single LIVE LAUGH LOVE!

The Fan Carpet: Arena theme is “Echoes of My Mind” that appears courtesy of Corinna Jane, from her EP Queen of Wands out now!

ALL-FEMALE BRITISH ROCK BAND THE HOT DAMN! SHARE A TRIBUTE TO ALL THE HUNS ON THEIR COLOURFUL NEW SINGLE LIVE LAUGH LOVE

The Hot Damn! say – pop punk is officially back huns!

Hailed as the ‘colourful chaos’ of rock, the all-female British four piece share their brand new single ‘Live Laugh Love’, out everywhere now. Watch the music video here. ‘Live Laugh Love’ is described by the band as “a giant dose of good time, cheesy rock”. A sugar-infused power pop anthem GUARANTEED to make you smile – it was recorded in Doncaster and mixed in Australia – and is accompanied by a sickly sweet video shot at a caravan park on the Costa del Morecambe (Lancashire).Speaking of the track, Gill says, “Back to normal from riding the epidemic train, and discovering the joy of “reliving” your life felt like a very fitting message for our new single. Making plans and making the most of things in general, and not giving a crap is more important than ever. 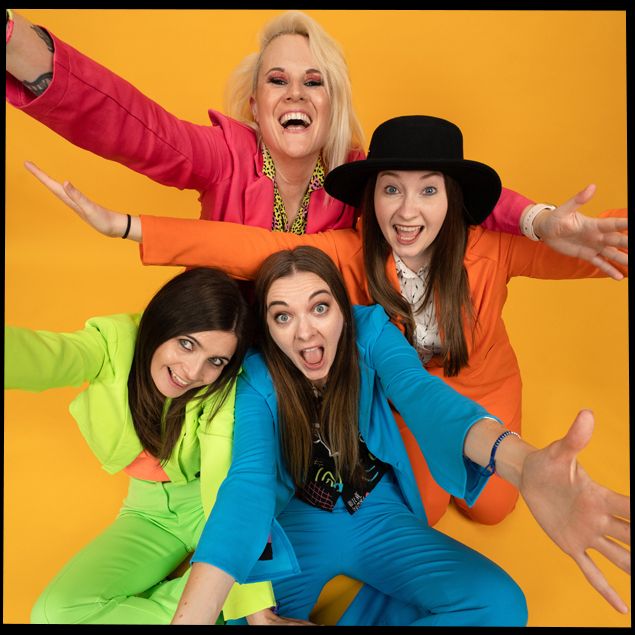 It’s a parody of those kitsch yet cringeworthy motivational signs you would find in cheap and cheerful homeware shops, which were very popular in the late naughties. Considering the irony…..we wanted to bring back the essence of the message with a humorous twist.We want people to embrace the cheese! It really is a case of a full on slap of stilton in the face! To have people reflect and move on from the miserable time of the pandemic, and just embrace the other side with guns blazing. Shake off their miserable side and just enjoy whatever it may be! Life! Love? New music! Positivity!”Naming icons like Blondie, The Donnas and Kim Wilde, as well as Wet Leg and Wolf Alice as their biggest influences, these four feisty ladies are no strangers to the music scene.

Formed out of the ashes of The Amorettes and Tequila Mockingbyrd, The Hot Damn! boasts the talents of Gill Montgomery (The Amorettes), Josie O’Toole (Tequila Mockingbyrd), Laurie Buchanan (Aaron Buchanan and the Cult Classics) and Liz Hayes (New Device/Sophie Lloyd band).Debut single ‘Dance Around’ achieved A-list Planet Rock radio play, as well as being shortlisted for Classic Rock ‘Tracks of The Week’. Follow up single ‘I Didn’t Like You Anyway’ became a firm favourite on the airwaves thanks to Planet Rock and Kerrang! radio A-list airplay as well as support from BBC Introducing and Primordial radio.With their debut album set for release early 2023, get ready for your life to become a WHOLE LOT more colourful… very soon!