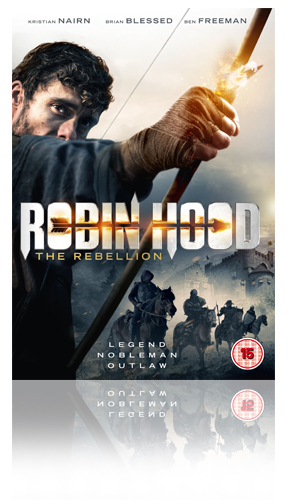 To celebrate the home entertainment release of ROBIN HOOD: THE REBELLION, available on DVD and Digital HD 5th November, we have a copy of the DVD up for grabs, courtesy of Signature Entertainment!

Thrilling swordplay, brutal action and gripping intrigue make this fresh take on Robin Hood a must-watch for fans of Game of Thrones and Vikings, as well as those with a taste for action classics like Die Hard and The Raid.

Ben Freeman (a favourite of Emmerdale fans) makes a terrific Robin Hood - a reckless, brave hero going up against insurmountable odds. James Oliver Wheatley, soon be seen in the smash hit TV series Vikings, is a standout as the villainous and eminently hissable Sheriff of Nottingham, while screen legend and star of Robin Hood: Prince of Thieves Brian Blessed steals the show in the role of Friar Tuck.

Newcomer Marie Everett is a Maid Marian like you’ve never seen, and very handy with a sword. Kristian Nairn (famous as Hodor from Game of Thrones) also appears, along with Torchwood’s Gareth David-Lloyd as ace warrior Green.

Beautifully filmed, with a stirring score, and jam-packed with brilliantly choreographed fight scenes, ROBIN HOOD: THE REBELLION is a thrilling slice of escapist entertainment that’ll have you rooting for Robin and his merry marauders.

ROBIN HOOD: THE REBELLION IS AVAILABLE ON DVD AND DIGITAL HD NOW

-1 (one) winner will receive 1 (one) DVD copy of ROBIN HOOD: THE REBELLION. The prize will be delivered to the winner upon receipt of their email contact details