Angelina Jolie (FIRST THEY KILLED MY FATHER, UNBROKEN, IN THE LAND OF BLOOD AND HONEY) has signed on to direct UNREASONABLE BEHAVIOUR, a biopic about the legendary British war photographer Sir Don McCullin, based on his critically acclaimed autobiography of the same title it was announced today.

BAFTA-nominated screenwriter Gregory Burke (’71, ENTEBBE) is writing the screenplay, an adaptation of McCullin’s autobiography UNREASONABLE BEHAVIOUR, an unflinching account of the celebrated British war photographer’s life, which took him from poverty-stricken, wartime London to some of the world’s most dangerous war zones.

Best known for his often harrowing black and white images taken in Vietnam and Cambodia whilst working for The Observer and The Sunday Times Newspapers, McCullin risked his life to capture these images of war which continue to resonate to this day. He is respected for the empathy and honesty of his depiction of human suffering in his work. 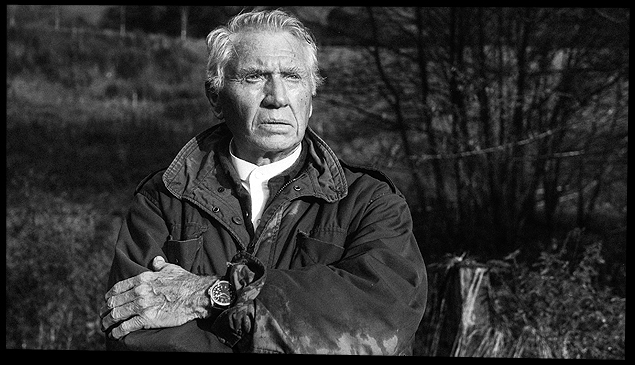 "I am humbled to have a chance to bring Don McCullin’s life to film,” said Angelina Jolie. “I was drawn to his unique combination of fearlessness and humanity - his absolute commitment to witnessing the truth of war, and his empathy and respect for those who suffer its consequences. We hope to make a film that is as uncompromising as Don’s photography, about the extraordinary people and events he witnessed, and the rise and fall of a unique era in journalism.”

Don McCullin said “Having viewed Angelina's last film on Cambodia (and having spent so much time during the war there) I was very impressed at how she made such a powerful and accurate representation of the place at that time. I feel as if I am in safe, capable and professional hands with her."

“Don McCullin is someone that we’ve long held a deep and profound respect for,” said HSB’s Hardy and Baker jointly. "His remarkable story is one of brutal honesty, unflinching courage, and unbound empathy. Angelina has carved a considered approach to the material that we’ve all been looking for - relevant and compelling, ethically sensitive and engaging. We are excited by her vision and look forward to supporting her depiction of a man who deserves to be remembered for his extraordinary contribution, service, and lifelong work to humanity.”

Angelina Jolie is an Oscar®-winning actor turned filmmaker who most recently co-wrote and directed the historical biopic FIRST THEY KILLED MY FATHER, based on Cambodian author and human rights activist Loung Ung’s memoir.

Jolie is repped by WME, and Sloane, Offer, Weber & Dern

Burke is repped by Casarotto Ramsay & Associates and UTA.

McCullin is represented by Rogers, Coleridge & White and United Agents

About Working Title Films
Working Title Films, co-chaired by Tim Bevan and Eric Fellner since 1992, is one of the world’s leading film production companies. Together they have made more than 100 films that have grossed over $8.5 billion worldwide. Its films have won 14 Academy Awards®, 40 BAFTA Awards and numerous prestigious prizes at the Cannes and Berlin International Film Festivals.

Bevan and Fellner have been honoured with the Producers Guild of America’s David O. Selznick Achievement Award in Theatrical Motion Pictures, the PGA’s highest honour for motion picture producers. They have also been accorded two of the highest film awards given to British filmmakers; the Michael Balcon Award for Outstanding British Contribution to Cinema, at the Orange British Academy Film [BAFTA] Awards, and the Alexander Walker Film Award at the Evening Standard British Film Awards. They have also both been honored with CBEs (Commanders of the Order of the British Empire).

About Hardy Son & Baker
Academy Award® nominated actor and producer Tom Hardy formed Hardy Son & Baker with partner Dean Baker in 2012.  Since its inception, the company has focused on developing and producing bold, sophisticated, high-quality content for both film and television.

HSB most recently teamed with Ridley Scott’s Scott Free Productions to produce the BBC One/FX three-part limited series “A Christmas Carol,” an original take on the Dickens' classic written by Steven Knight. The project marked the second collaboration for HSB, Scott Free, and Knight following their work together on the 2017 award-winning drama series “Taboo,” also for BBC One and FX.

The company’s feature projects currently in development include the ensemble drama THE THINGS THEY CARRIED, based on Tim O’Brien’s award-winning classicstarring Tye Sheridan, Tom Hardy, Stephan James, Bill Skarsgård, Pete Davidson, and Ashton Sanders; dramatic thriller WILDLANDS, written/directed by Kim Mordant and starring Matthias Schoenaerts in an Angola-based journey through an extraordinary yet rarely seen side of the bomb disposal world;  ONCE A PILGRIM, a gripping thriller based on the celebrated novel written by ex-SAS soldier James Deegan and in collaboration with Working Title; UNREASONABLE BEHAVIOUR, directed by Angelina Jolie and based on the life of legendary British war photographer Don McCullin; and SHACKLETON, written by BAFTA-winning writer Peter Straughan and centered on the exploits of Ernest Shackleton, the renowned British explorer who lead multiple expeditions to the Antarctic.

Television projects in development include a second season of the Emmy®-nominated and BAFTA®-winning drama series “Taboo” for BBC One and FX; a six-part adaptation of the coming-of-age classic “Great Expectations,” written by Steven Knight and the second installment in a series of Dickens adaptations for BBC One and FX; and a number of additional developments are in the works across both film and television with an array of singular filmmakers, writers, and artists.