The Fan Carpet are delighted to present the timeline from Vanarama who have visualised the 20 most iconic on-screen autonomous vehicles from 1960s to present day to show how the fictional technology reflected the advances of the time.

From the Love Bug through to Westworld, see how movies and TV shows have evolved self-driving vehicles to create unforgettable moments.

Self-driving cars are becoming a more realistic prospect with each passing year as companies from the traditional (Toyota, Audi and BMW) to the more disruptive (Tesla, Google and Uber) race to be the first to produce an intelligent vehicle that can get you from A to B without you needing to lift a finger.

There’s a financial incentive for this urgency to be number one. The global market for autonomous vehicles is projected to be valued online.

So, it’s no surprise this tech has captured the imagination of Hollywood since the swinging sixties. On-screen automation has been portrayed through predictions of future technology, supernatural forces, or partnerships with people working on the real deal. This has meant there’s been no shortage of iconic self-driving cars on-screen.

To show how attitudes and predictions about driverless cars evolved, we’ve created a timeline of how they have been portrayed in film over the past several decades and looked at how close fictional tech was to reality at the time. 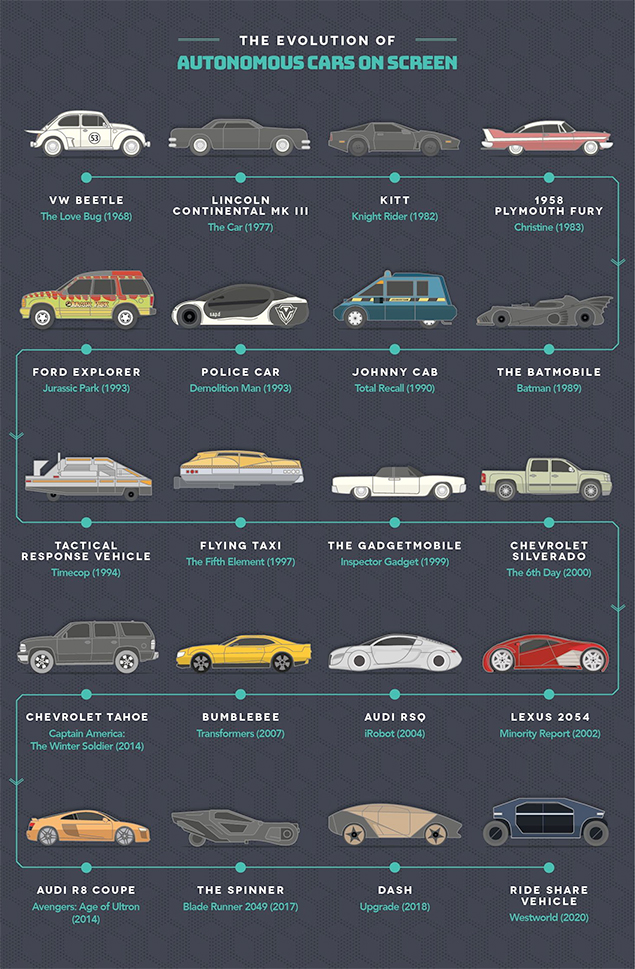 We're getting closer to traveling from A to B in autonomous cars by the day, with a projected market of $615bn by 2026 (up from $27bn in 2017) including auto manufacturers such as BMW, Audi, Toyota to more disruptive tech-led businesses like Tesla, Google, Uber.

People are fascinated and wary of self-driving vehicles with a 2020 study showing: