Multi-talented Singer, Songwriter,4Music TV Host, Actress and YouTube sensation Bethan Leadley, has teamed up with Europe’s leading stationery brand, BIC® to give one young budding lyricist an amazing opportunity to get a break in the music industry, just by putting pen to paper.

By getting lyrical with a BIC® 4 Colours™ Shine pen, one talented songwriter aged 15 to 24 from across the UK will win the chance to go in studio with Bethan and a crew of music industry professionals to produce their song.

The winner will have their song performed – or could perform it themselves on stage with Bethan - in front of thousands of people on the main stage at The Big Feastival on Saturday 26 August. The festival, which takes place at Alex James’ farm in The Cotswolds, has a line-up that also includes Olly Murs, Louisa Johnson, Ella Eyre, Betsy, Frances and many more.

Throughout the process, they’ll be rubbing shoulders with talent agents, music producers and professional songwriters to give them an amazing behind the scenes look at how the music industry works and even a chance to get their foot in the door.

In our interview, The Fan Carpet's Marc Jason Ali spoke exclusively to Bethan about the BIC® Write and Shine Competition, her career, getting laser surgery, Summer in the City and her eagerly awaited debut Album...

So what was it about BIC that made you decide to lend your name to their music competition?

Well there’s a few different reasons, I mean 1. Obviously everyone knows it’s a big company and it was really cool that they came to me for the competition with such a big name, it’s such a big brand, and I really liked the ideas that they had for the competition and how they wanted to help young songwriters and give other people an opportunity, because I feel like these days you know (people are like?) being in a competition that gives songwriters a chance and (kind of?) give them an idea as to what the industry is like, I think is a really really cool thing. And so that’s the reason I decided to (can’t make out) I wanted to be a part of it because I feel like there needs to be, a lot of people really don’t know (can’t make out next few parts) music industry, songwriting industry and I just thought it would be a really cool thing for young people or one young person to experience.

Yeah yeah they contacted me, they came to me with the idea and said “you know we like your music, we like the things you do on YouTube” and yeah that was obviously really really cool. And so yeah they contacted me and I just really really liked the competition idea and we got things moving really quickly and we kind of went back and forth about what we wanted it to be and what to include and what to judge on, but we got there, to a point where we sad “Yeah this is a great idea, this is a great competition.”

It was hard to keep so quiet about it, because it had been a really really trying time and I was just so so excited for the competition to start and tell people about it and I can’t wait to start getting the entries.

I bet there’s been a few already...

Yeah there have, I haven’t seen any of them yet because they’re not sent to me, they’re sent to someone else who is compiling them all for us to have a look at, but I’m really excited.

There’s been a couple of people who have been tweeting me saying “I’m sending mine off now, I’m pretty nervous”.

I’m just really really thrilled that people want to get involved so much that we’ve had all age groups get involved.

Yeah that’s great and also YouTube is quite a good platform for that sort of thing, well it’s launched your career, you’re now on 4Music? 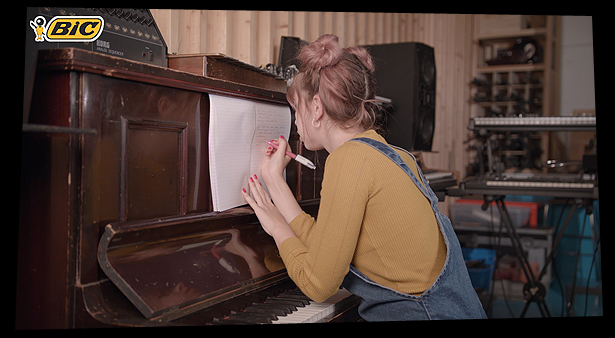 Find out more about the BIC® Write and Shine Competition here and keep up-to-date with Bethan Leadley on Twitter and YouTube.

About BIC®
BIC is a world leader in stationery, lighters, shavers and promotional products. For more than 60 years, BIC has honoured the tradition of providing high-quality, affordable products to consumers everywhere. Through this unwavering dedication, BIC® has become one of the most recognised brands in the world. BIC® products are sold in more than 160 countries around the world. In 2016, BIC recorded Net Sales of 2,025.8 million euros. The Company is listed on “Euronext Paris” and is part of the SBF120 and CAC Mid 60 indexes. BIC is also part of the following Socially Responsible Investment indexes: CDP’s Climate A List, CDP’s Supplier Climate A List, CDP Supplier Engagement Leader Board, FTSE4Good indexes, Ethibel Sustainability Index (ESI) Excellence Europe, Euronext Vigeo – Eurozone 120, Euronext Vigeo – Europe 120, Stoxx Global ESG Leaders Index.