HOLY SCALEXTRIC BATMAN: Classic BATMAN and ONLY FOOLS AND HORSES Scalextric Models Lead The Pack For Father’s Day Gifts In 2021 | The Fan Carpet

HOLY SCALEXTRIC BATMAN: Classic BATMAN and ONLY FOOLS AND HORSES Scalextric Models Lead The Pack For Father’s Day Gifts In 2021

HOLY SCALEXTRIC BATMAN - THIS NEW RANGE IS PUTTING THE FUN BACK IN TO FATHER’S DAY!

Is your dad or father figure a big kid at heart? Someone who’d love to relive his childhood with you, playing with his very favourite toy? Of course he would - and now’s your chance for him to combine both nostalgia and fun! Expanding on the success of the new Film and TV category introduced in 2020, Scalextric have produced the iconic 1960s Batmobile; and the classic Reliant Robin from beloved sitcom Only Fools and Horses - the perfect gifts for kid-dads everywhere on June 20th.

The stylish and ultra-cool Batmobile, from the Adam West TV series, features the distinctive vintage fins and red trim, and comes with a Batman figure in 1960s garb.  The wearing of masks and capes while playing with this collectable classic is not essential, but highly recommended. 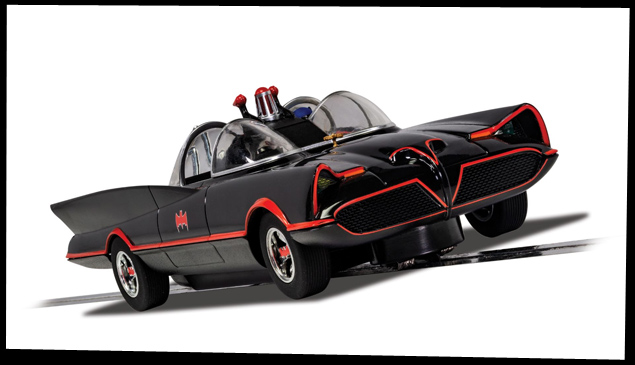 The Only Fools and Horses twin pack, features probably the most recognisable vehicle to ever grace the streets of Peckham, Del Boy's yellow Reliant Regal, that lacks road tax but comes with a pair of fluffy dice as standard! It is paired with Del's tastefully decorated Ford Capri Mk III, purchased by Del to allow him to separate business and pleasure.  Perfect old school fun brought bang up to date for Father’s Day, you’d be a proper plonker not to get your dad this just-about-roadworthy pair for his very special day, Rodders!

Since its launch, the Scalextric TV and Film car collection has proved incredibly popular. “Back in 2018 I said it would be cool to produce a Back to the Future DeLorean in Scalextric,” says Martyn Weaver, Scalextric Head of Brand.  “The response was ‘but DeLoreans didn’t ever really race’. The point was that it would be cool to create a Scalextric DeLorean, and within a split second we had decided we should make the Back to the Future model and that is how the Scalextric TV and Film car collection started.”

Martyn Weaver, Scalextric Head of Brand on the TV and Film Collection added “For many years the focus on product selection for Scalextric cars has been motorsports, and why wouldn’t it be? Because that is what Scalextric has been all about since the 1950s - bringing car racing into your home. Sixty plus years on and we know that Scalextric has its own fans and they aren’t all obsessed with motorsport.

“The next challenge then came about convincing the team we should also do the Only Fools and Horse Reliant Van and Capri. The Capri was an easy one, but a three-wheeled van to run on a Scalextric track might be more of a challenge. But as we talked through it more, we found ourselves laughing and smiling about the idea, and if the fun element of the product exists in us then it will translate to customers. All three releases then went on to be some of the most successful Scalextric releases in the past few decades!

Once we knew we were onto something the question was where to go next. Around that time my son returned from a trip to stay with his grandparents and he brought back with him one of the toys that he played with whilst he was away, and it was the Adam West Corgi Batmobile. I had one myself as a kid and I recall picking it up and remembering what an amazing and unique looking car it was. I had watched the repeats of the TV series in the 1980s, but my son has never seen the TV series, yet loved playing with the car. It got me thinking that this vehicle appeals to multiple generations and we should recreate it in Scalextric.

The Batmobile felt a natural next step after the DeLorean, which had captured the interest of the 80s kids and their parents - now let’s produce something that appeals to the kids of the 60s, 70s and 80s.

Despite being a toy Scalextric still today appeals to adults, and often adults just need that little something to entice themselves into buying something they really want even if it is a toy, if it is something as cool as the Batmobile then who cares - call them a kidult!

When adults hear the name Scalextric it often reminds them of positive childhood memories, and the fun and excitement of racing cars - couple this with a cool car like the Batmobile and no wonder many fans have now reignited their passion and got playing with Scalextric again.”

A BRIEF HISTORY OF SCALEXTRIC
Production of Scalextric products began in 1957 in Hampshire, England, and 1960 saw the introduction of the plastic range of cars as the tinplate cars ceased. Through the years Scalextric has been owned by companies such as Tri-ang and Rovex Ltd, and in 1971 production of Scalextric and Hornby trains began from Westwood, Margate. In 1982, an independent company was formed – Hornby Hobbies Ltd (later Hornby Plc) – and during the late-1990s production of Scalextric was transferred to China. The accuracy and detailing of today’s Scalextric models remain second to none. As the world turned evermore to digital technology, Scalextric was not to be left behind and in 2004 introduced its first fully digital racing set (multi-car racing with lane changing functionality). Scalextric SportWorld was also introduced to allow racers the ability to hook their Scalextric sets up to the internet to create a global community through on-line racing. Today Scalextric offers a slot car system for all ages. For the younger driver there is ‘My First Scalextric’ which is an easy assemble and operate 1:64 scale track system, this is followed by Micro Scalextric which uses the same track system but with larger layout options including special track features. Then for the more experienced racer there is the commonly recognised and loved traditional 1:32 track system which offers a multitude of car, track and accessory options. More recent developments include ARC, a Scalextric App based race management program and Spark Plug which offers the chance to control your Scalextric Car with your phone or tablet.