Things Are Getting Really, Really Wild With The Release Of The 4K Restoration Of John McNaughton’s Classic WILD THINGS On May 23 | The Fan Carpet

Things Are Getting Really, Really Wild With The Release Of The 4K Restoration Of John McNaughton’s Classic WILD THINGS On May 23 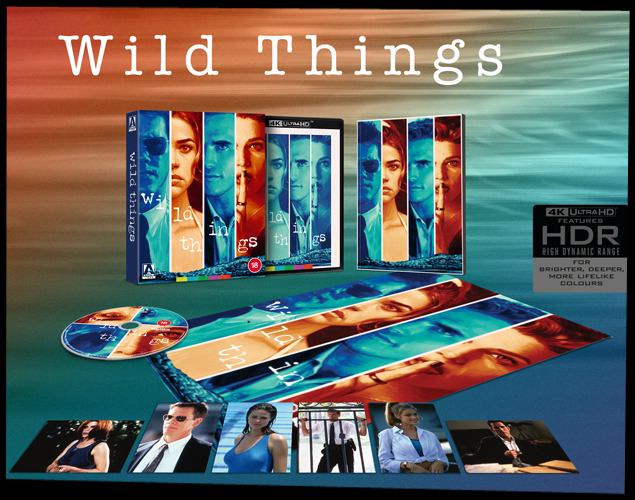 Taking its cue from Fatal Attraction (work and sex don’t mix) Al Pacino plays a cop who gets involved with a murder suspect, Ellen Barkin, in Harold Becker’s superior mystery thriller. Smartly scripted, by Richard Price, this is a knockout A-list Hollywood treat that really hots up when the leads get together. Look out for an appearance by Michael Rooker, star of Henry: Portrait of a Serial Killer (the debut film from John McNaughton, director of Wild Things).

This film did for Linda Fiorento what Basic Instinct did for Sharon Stone - turned her into an iconic cinematic femme fatale. Fiorentino is note perfect as a sexy and cunning con-woman in John Dahl’s cult hit noir, that features Bill Pullman and Peter Berg as her hapless victims.

So, what happens when you take record-breaking Basic Instinct screenwriter Joe Ezterhaus, legendary director William Friedkin (The Exorcist), and actress of the moment Linda Fiorentino (red hot off the previous year’s The Last Seduction), not to mention NYPD Blue heartthrob David Caruso - should be a recipe for a surefire box office success, no? Well, it wasn’t… but that’s not to say Jade is as bad as some of the critics suggested, Watched now it’s a thoroughly entertaining ninety-five minutes of raunchy murder mystery.

In John McNaughton’s fantastically entertaining Florida-set noir, Matt Dillon plays a school counsellor accused of assault by wrong-side-of-the tracks loner Neve Campell and rich kid Denise Richards. As a cop investigates, the story unravels, leading to some seriously sexy shenanigans, with double and triple crosses in a screenplay by Stephen Peters that you’re never able to second guess. And to cap it all, Bill Murray plays a seedy lawyer and Kevin Bacon goes full frontal. It’s a hell of a wild time all round!