Alice Through the Looking Glass(2016) | The Fan Carpet

Alice Through the Looking Glass(2016) by Federica Roberti 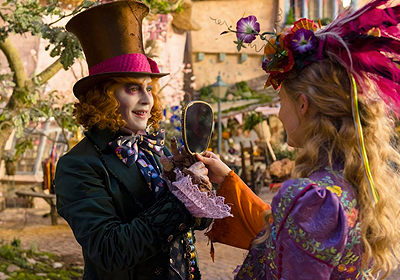 "a highly entertaining film and it can be considered as a well made cautionary tale that wants to teach a lesson old as time itself: Seize the Day"

Recently Hollywood seems stuck in making adaptations from bestsellers and classics, however, even though the title suggests the same thing for Alice Through the Looking Glass, the movie is inspired not by the homonymous Carroll's novel but from his famous and peculiar characters.

Set a few years after Alice in Wonderland, Alice Through the Looking Glass starts with the protagonist as the Captain of her father's ship “Wonder”. She is deeply changed from the Alice who fell down the rabbit hole. She is independent and headset towards new adventures and being in charge of her father's business as well a her life. At home, however, things are different, and, in order not to lose her house, her mother has to sell the family ship to Hamish, the man who Alice refused to marry after her first trip to Wonderland, along with the rest of Mr Kingsleigh's business.

At this difficult time, during the decisive meetings between Alice and Hamish, one of her old fantastic friends pays her a visit to warn her that Wonderland, once again, needs its heroine back to save the day. After falling through a mirror that connects Earth with Wonderland, Alice is once again greeted by her old friends. This time, however, it is not Wonderland that needs saving, but the Mad Hatter.

In fact, after finding one of his first creations, he convinces himself that maybe his long lost family is alive and he needs to find them.  When even Alice believes that this is impossible, the Mad Hatter, disappointed by his true friend, falls into a terrible depression that makes him fade away.

In order to save him, Alice is forced to embark on a new mission: steal the Chronosphere from Time himself and travel back in time to discover if the Hightopp family survived the Jabberwocky's attack. Plot wise the story is completely different from the one told in Lewis Carroll's novel. However, considering that the film was clearly inspired only by the characters, the story, as an original piece, is really interesting.

James Bobin's directing still maintains that eccentricity that Tim Burton brought in Alice in Wonderland. However, his style seems brighter and more cheerful than the grim tone that Burton uses in his films. This, paired with a theatricality in the cast's performances, made the move easier on the eyes.

The cinematography, as well as the makeup, hair and costume department, used once again bright and warm colours to paint Wonderland and their citizens. The texture and luminosity of the images, paired with the CGI, is spectacular. The high quality of the special effects is neat and clear, making the 3D experience worth it.  Moreover, even though Wonderland lost the creepy and dark setting, typical of all Burton's movies, it acquired a brighter tone that creates a fantastic contrast with the dark and gloomy colours used in London.

The cast ensemble did an amazing job in recreating the magic of the first movie. Each actor brought back to life their characters while adding something new to their performance making them more extraordinary by becoming almost a parody of themselves.

Helena Bonham Carter in reprising the Red Queen made her even more interesting by showcasing her gadfly attitude to mask her deep vulnerability. Her relationship with Time, portrayed by the eclectic Sacha Baron Cohen, is always motivated by a hidden purpose, highlighting the scheming side of the Red Queen.

Anne Hathaway, as the White Queen, had the chance to play a character that lost its air of perfection by adding some flaws to her personality. In fact, even though she is supposed to be righteous and innocent, in Alice Through the Looking Glass, the audience learns that even her innocence is stained by a small lie, making her a slightly more complex character than in the first movie.

Throughout the film, the themes exploited are different, but all connected together, the main one is the endless human fight against the inexorability of time. No one can escape from it and since it's finite for everyone, the most important thing that the film wants to stress is to cherish all the moments in life and never waste a minute of it, especially when it's time spent with loved ones.

Not dwelling on the past is another topic ever-present in the film; every time that Alice fell into a specific time in the past, she tries to change what happens. However, it is truly impossible to change the past and to live a life filled with regrets for something that was means forgetting to enjoy the present to the fullest.

All in all, Alice Through the Looking Glass is a highly entertaining film and it can be considered as a well made cautionary tale that wants to teach a lesson old as time itself: Seize the Day and always cherish the time that you are granted in this world.