By Light of Desert Night(2020) by Sarah Morris 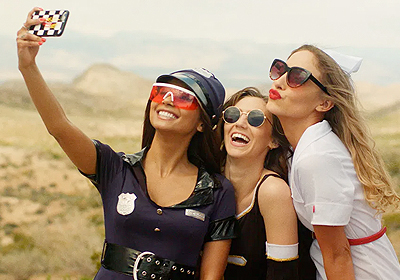 "From an award-winning team making their feature debut, this is thrilling and unsettling in doses with a shock ending which will stay with viewers long after the film has finished."

By Light of Desert Night is a film written and directed by David Stuart Snell starring Lara Pictet, Meghan Carrasquillo, and Alexandra Bokova, that follows three best friends on a road trip into the desert for one last camping adventure before April (Pictet) gets married, but along the way they find out dark secrets about each other which ends up changing their lives forever.

Released in the UK, on streaming services iTunes, Sky Store, Amazon Prime Video, Chili Cinema and Virgin Media TV Store from 25th May 2020, By Light of Desert Night begins with a car pulling into what seems to be an abandoned gas station/diner and Suzy (Carrasquillo), wearing a fancy dress costume of a nurse enters the shot and questions the man behind the counter why the place is empty before heading back to the car where April and Beth (Bokova) become impatient and want to head back on the road.

The next 15 minutes of the film is focuses on the three main characters talking to one another, these friends have known eachother for a long time, that much is clear. They stop on the side of the desert road to take selfies and come into some altercation with two men who begin to take photos of them with a Polaroid camera before attempting to kidnap and assault the three women. In what seems to be a very poorly developed and constructed scene, we see the girls successfully get away, back in their car, and back on the road as if nothing had just happened to them.

Continuing the drive, the three women soon realise they aren’t sure where “Raven’s Rock” is, so they pull over to ask for directions from a native stranger, selling paintings on the road side. All is not what it seems with him; he asks some questions to the three girls, before they pay him for a map to their location and back in the car they go.

When they make it to “Raven’s Rock” the scene cuts to camera shots of the location but is not edited very well and this is obvious due to the patchy editing of the scenes. The film then cuts to the camp base where the three main characters have decided to stay for the night, there is a dangerous beauty to the landscape that is well captured, making the desert feel like a character of its own.

Without giving away too much away, By Light of Deserts Night, does have an interesting approach to starting the film - one that I haven’t seen before. When watching this film throughout I thought there could be improvements with the story, the camera angles on a few of the scenes, and the slow development to the plot – as, to me, it didn’t grip my attention enough until near the end and leaving this film with the cliff-hanger. I feel with a bigger budget, better cast or more main characters, and better plot development By Light of Deserts Night could be a much better film which aims to grip the audience almost straight away – which didn’t happen with me and it took to the end of the film to capture my attention, unfortunately. That being said, I still recommend watching this film to anyone who is wanting to watch it.